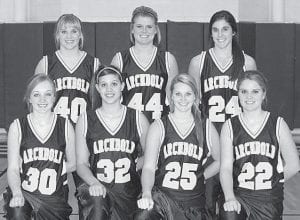 The Archbold girls basketball team has a new, but familiar, face on the sidelines this year when the season begins.

Brian Ziegler, an Archbold High School graduate, takes over the head coaching job on a girls squad that finished 15-8 and tied for third in the Northwest Ohio Athletic League last year.

Ziegler, a Defiance College graduate, is no stranger to the hardwood. He spent nine years at the helm of the Stryker boys program and has been associated with the Archbold boys program the past few seasons.

Seven returning letterwinners welcome Ziegler to the program. The coach is quick to point out that those seven returnees, along with a "strong" junior class, is the strength of this year’s team.

"We have good quickness and some height," he said. "All gained valuable experience at the varsity level last season."

Alyssa Schaub, a 5-6 sophomore guard who averaged 4.3 ppg and 3.1 rpg, rounds out the returnees.

While the Streaks seem to a have veteran squad, scoring is one area that Ziegler is concerned with. The Blue and Gold lost the team’s leading scorer, Dani Newman, to graduation. She averaged 9 ppg last year.

The Streaks kick off the season, Saturday, Nov. 29 when they host Edgerton.