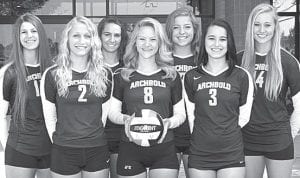 A member of the team had participated in a practice with a university squad, which is prohibited by OHSAA rules.

“We are looking to be competitive in both our league and non-conference schedules,” said Rufenacht.

“There are a lot of talented teams in the area, which should be a good challenge to show our strengths and weaknesses.”

All seven letterwinners are seniors.

Dale Grime is the assistant coach, while Jill Holdgreve is the junior varsity coach. Amy Baden is the freshman coach.

The Streaks open their season, Saturday, Aug. 23, by hosting a tri-match with Stryker and Crestview.