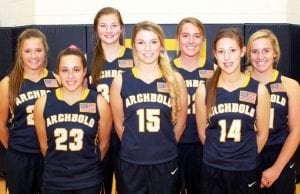 The Streaks finished with a 26-2 overall record and finished as Division III regional runners-up.

Brian Ziegler returns for his 10th season as AHS girls head coach, with an overall record of 305-118.

A. Peterson, a forward, returns as the team’s leading scorer, averaging 7.9 points per game and 3.9 rebounds per game.

Ziegler said team strengths include the fact his players are “good athletes with quickness and speed, which should allow us to play fast and apply pressure on defense.”

But with only two starters back, “we need to replace scoring and rebounding that were lost to graduation.”

Ziegler looks for another good season “with the amount of talent returning.

“As with every year, players will need to step into new roles and contribute.

“Kierstyn, Alyssa, and Morgan provided good leadership and statistics that we need to try and replace.”

As far as the NWOAL outlook, “our league and area have good players and coaches,” said Ziegler.

“The NWOAL is balanced, so we need to work hard to ensure we are in the mix of first-place teams come February.”