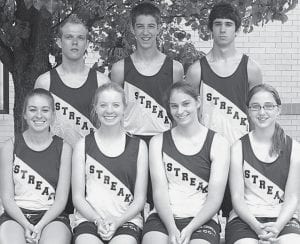 “As far as the girls squad goes, we have a small but dedicated group. They will make great strides individually while competing as a close and supportive team.”

Wachtmann is in his sixth year as head cross country coach of the Blue and Gold, and has 12 years of coaching experience.

He is assisted by Lindy Sauder and LaRoy Martinez.

Wachtmann looks for Volkman to build on his “outstanding track season, as he ran all the way to the 800-meter state finals. He returns as our runner most likely to lead.”

Storrer has been training all summer and is expected to close any gap in Archbold’s frontrunners.

“Gobrogge continues to run stronger and is also coming off a successful track season as a hurdler. He has the potential to run near the front as well,” said Wachtmann.

“The team will be smaller but very dedicated to the sport of running,” said the coach. “I expect that every athlete will have substantial improvement while enjoying the training at the same time.”

He expects to improve on last year’s eighth-place finish in the NWOAL.

Bowman is “ready to run from early season on,” said Wachtmann. “Laura is a great role model on the girls team and shows excellent leadership.”

Bell is the team captain and “also sets a great example for all the other athletes. Jackie was also our Grit Award winner last year,” said the coach.

Storrer and Price “enjoy running and are already ahead of last year. The whole team is supportive and encouraging as they constantly improve.”

The Streaks have only five girls on the roster, so it will be difficult to place high in team scoring against larger squads. Aleah Lambright, another letterwinner, hopes to return later in the season after she recovers from an injury.

Both teams are scheduled to open their seasons, Saturday, Aug. 23 at the Defiance Cross Country Open.