Seven Firms Recognized For Years Of Service By Archbold Chamber 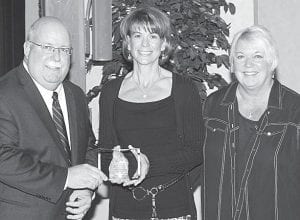 Seven businesses were honored for their years of service by the Archbold Area Chamber of Commerce at its annual meeting and Citizen of the Year banquet, Thursday, Nov. 1.

Sonit and Arlan Yoder partnered to turn the application into a business in 2002. Yoder bought out Sonit shortly thereafter, and is the firm’s sole owner.

DynaCal has evolved into a system for managing staff, scheduling facility and work order management. Schools and churches are the firm’s main customers.

•Homier’s Monumental had its beginnings in 1989 as Mark and Kathy Homier’s first small business, Memorial Arts and Design, a wholesale provider.

They ventured into retail in 1997, becoming Homier’s Monumental.

In 2002, a display and offi ce was established in a building north of Archbold. Earlier this year, the office and an expanded display were moved downtown.

The company is known for its original and custom designs, including veterans and war memorials.

• McDonald’s opened a restaurant in Archbold in 1987. Jim Rivello purchased the business from original owner Don Michaels in 1993.

The first McDonald’s opened in 1955. The drivethrough window was created in 1975 near a military base to serve soldiers who weren’t allowed to get out of their cars while wearing fatigues.

Becky Haines, the general manager, is one of the Archbold restaurant’s original employees.

The firm offers custom processing, retail and wholesale services, and a concession wagon.

•Brookview Farms Meats & BBQ was started in 1962 by Leon Lugbill, who spent much of his life in meat processing. He started his own business, cutting and wrapping meat for friends and neighbors.

The business was started on his 80-acre farm near Archbold, where he also fed cattle.

While the company is still on the same site, second- and third-generation members of the family own it.

The firm has added a BBQ catering business.

•Lugbill Supply Center started as a partnership by brothers Peter, Eli, and Sylvanus Lugbill in 1918, and was geared toward the agriculture industry.

The company purchased a retail lumber business from Riegsecker Brothers, Inc. Located across the street from the Lugbill Livestock Auction, it was a convenient source of lumber and farm supplies.

The business, now known as Lugbill Supply Center, moved to its current location in 1975. Its size was tripled and it became a full-service home center.

Julie Brink, chamber director, said the selection of the Black Swamp Arts Council for the 2012 Spirit of Archbold award was “a nobrainer.”

Founded in 2000, BSAC promotes the visual, performing, and literary arts through several programs.

More than 1,000 young people in grades 6-12 have participated in BSAC’s summer “Creativity Camp.”

BSAC also has provided arts activities at festivals and events, and partnered with Sauder Village to bring the Toledo Symphony Orchestra for a free concert for fourth graders.

BSAC has sponsored art classes for adults, and since 2002, provided over $33,000 in scholarships for young people to attend summer music and art camps.