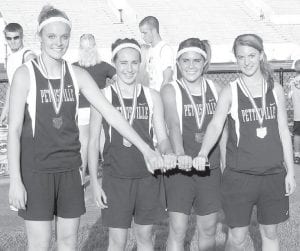 It is the most to qualify for state in school history.

The girls 4×800 relay team won the regional championship, Wednesday, May 26, with a time of nine minutes, 49.75 seconds. According to Tom Wagner, Pettisville head track coach, “they smashed the school record that was set back in 1985.”

The 4×800 included Brady Avina in the leadoff position, the same position her mother, Josie (Short) Avina, held on the 1985 team that set the previous record.

Tanner Hostetler was the second runner, followed by Tessa Yoder and Samantha Shinhearl.

Shinhearl also anchored the 4×400 team that qualifi ed for state by finishing fourth in 4:08.64, breaking the school record of 4:12 the relay had set in the preliminary.

Avina again was the leadoff runner, followed by Hostetler, Rachel Beck, and Shinhearl. 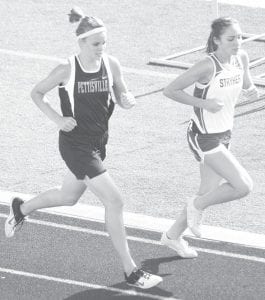 Samantha Shinhearl advances to the state meet in three events: the 4×800, 4×400, and the 1600, above, in which she placed third. To the right is Stryker’s Torey Varner, who also qualified for state with a fourth-place regional finish.–photo by Donald Young

It was a very close race for the final qualifying spot (the top four finishers in each event qualify for state). Pettisville beat the Archbold team by a mere two-hundredths of a second.

In addition to qualifying in both relays, Shinhearl also qualified in the 1600-meter run. She finished third in 5:20.44, another school record.

Other PHS girls who advanced to the regional meet but did not finish in the top eight of their events: Katie Yoder, 100- and 300-meter hurdles; Avina, 400; Laura Rochefort, pole vault; Kylee Garcia, discus. 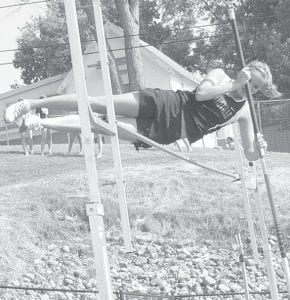 Stephanie Yoder qualified for state in the pole vault. She finished fourth at the regional meet.–photo by Jack Frey

The Blackbird girls finished ninth in the team standings with 29 points. Liberty-Benton won with 65.

In the boys events, Lincoln Frey, a senior, qualified for state in the 800, finishing fourth in 1:59.84 and setting a school record.

Frey also competed in the pole vault, finishing sixth and breaking his own school record by vaulting 13-0.

Tyler Wolfe, Columbus Grove, won with a vault of 15-4.

Ben Holland, also a senior, finished in a tie for tenth in the high jump by jumping 5- 8.

The State Track and Field Meet is run at the Jesse Owens Memorial Track Stadium at Ohio State University.