‘Seussical’ Is A Fun Study In Rhythm And Rhyme 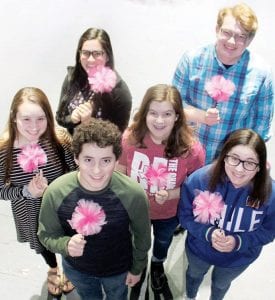 Members of the cast of the Archbold High School musical, “Seussical.” Front: William Nofziger, a sophomore. Middle row, from left: Gabby Cox, a senior; Erin Reichert and Kate Nofziger, sophomores. Back row: Karina Tirado and Jeremiah Hartman, seniors. Each holds a “clover,” which plays an important part in the show.– photo by David Pugh

The musical incorporates many of the characters and the stories of author Theodor Seuss Geisel, known to everyone as Dr. Seuss.

“Just being a character in this play, just everything is fun,” Karina Tirado said.

“You have to like rhyme. It’s fun. You learn all the rhymes to the music and the dances are all super exciting.

“There’s no scenes that are boring. It’s all excitement. Things are moving and the Cat is super crazy.”

The Cat, of course, is from the famous Dr. Seuss book, “The Cat in the Hat.”

Gabby has the role of the Cat.

“I’m kind of a narrator in general. I know what’s going on and I know what I want to go on.

“I love to encourage JoJo’s thoughts,” she said.

JoJo, played by William Nofziger, is another Seuss character.

A boy who has a big imagination, JoJo has flights of imagination called “thinks.” His thinks are “encouraged by the Cat, and they get me in trouble,” he said.

Karina said William and JoJo “both have a big imagination, so it wasn’t hard for him to play the role.”

JoJo’s thinks are encouraged by the Cat.

“I encourage him to be crazy and think of things that are remarkable and in the imagination world, but his parents and Whoville don’t think that’s so cool. They don’t know I’m there,” Gabby said.

When he’s in trouble with his parents, “I disappear. So I’m not getting in trouble. It’s just JoJo,” said Gabby.

Whoville refers to the Seuss story of “Horton Hears A Who,” in which an elephant named Horton hears the voice of the Whos, who live on a tiny speck of dust affixed to a clover.

Tirado plays Sour Kangaroo, a kangaroo who “thinks (Horton) is crazy because he’s obviously talking to a speck of dust, which he says has people.”

She described Sour Kan- garoo as “a sassy character. She’s really sassy. She’s loud and she likes things done her way. She’s the bad guy in the story.”

Karina said she has some similarities to her character.

“I’m not exactly the mean girl. I’m the leader of the bird girls, who are kind of the backup singers to the whole show,” she said.

Kate Nofziger plays Gertrude McFuzz, a bird who has but one tail feather– and a thing for Horton.

“She wants to get the attention of Horton, and so she tries to get a very long tail. But as the show goes on, she learns more about herself” and realizes she doesn’t need to change, Kate said.

“We have similar personalities, so it wasn’t hard to get into the quirkiness of her.”

When people see the show, Karina thinks people will relive their days of watching the Seuss movies and reading the books.

“It’s not going to be a musical where you want to fall asleep,” Gabby said.

The show features a group of seventh- and eighth-grade students who will play the Whos in Whoville and other roles.