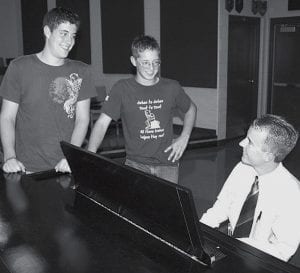 From left, Garrett Leininger and Seth Nofziger, Archbold High School seniors, with Kent Vandock, the school’s choral music director, seated at the piano. Leininger is a second alternate for the Ohio Music Educators Association all-state choir, while Nofziger will be a participant. Since the choir has a very strict policy that no student may miss a rehearsal for any reason, there’s a good chance Leininger will get to perform with the group. Only about 143 high school students are selected for the choir, Vandock said.- photo by David Pugh

Out of the 750 to 1,000 Ohio high school students who try out for the Ohio Music Educators Association All-State Choir, only about 143 actually make it.

Despite the long odds of being selected, Seth Nofziger, Archbold High School senior and a first tenor, has been chosen.

Further, Garrett Leininger, another senior and second tenor, has been named a second alternate for the all-state choir.

There’s a good chance Leininger will get to sing, because the all-state choir rules are very strict; miss one rehearsal, for any reason, and they go to the next alternate.

Having even one student selected for the all-state choir is a major accomplishment, Vandock said.

Nofziger said Vandock asked if he wanted to try out for the choir. He and Leininger made two recordings, which had to be class A or B songs, the most challenging levels,

They sang songs they rehearsed for solo and ensemble competition.

The recordings went to the OMEA weeks ago.

Nofziger said when word came last week, it was a surprise.

“I was very excited. Right away, I called my grandma, my aunt, my dad,” he said.

There are rehearsals around the state; the choir performance is Feb. 9, 2008, in Cincinnati at the OMEA convention.

Nofziger is looking forward to the trip; he said while he’s been to 45 of the 50 states, he’s never been to Cincinnati.

Normally, Nofziger said the tenors don’t have the melody. They usually handle the harmony.

“But every now and then, if the girls are with us, it’s the tenors” who get to carry the melody.

Garrett said he’d like to pursue music in college.

Nofziger said while he always wants to be involved in music, including singing barbershop, he is not sure if he’d like to make music a career.

Does this mean it will be easier for Nofziger and Leininger to get dates?

Leininger said for him, “It hasn’t had that effect yet.”