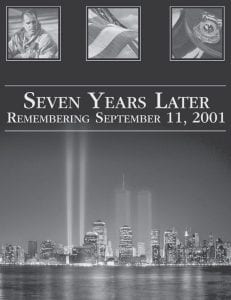 The result was exactly what the 19 terrorists wanted: destruction, carnage, death – and fear.

Since that time, America has been at war in two countries. At home, we have lost bits of our liberty: the searches at the airport, the knowledge that our phones might be tapped, all the dozens of things that are done differently in the name of Homeland Security. But we have avoided another attack on American soil.

For most, our lives go on. There are other things on our minds today. We go to work and worry about whether our jobs will be here tomorrow. We fill our gas tanks and hope we can afford to drive to work. We pray for our good health, so we can avoid financially ruinous medical bills. The terrorist attacks, now simply known as “9/11,” are slipping into history, becoming another distant memory along with Pearl Harbor and the assassinations of John F. Kennedy, his brother Robert, and Martin Luther King.

That can’t be allowed to happen. The events of 9/11 must not be forgotten. Those who wish ill on our country and our people still exist. They still harbor the terrible desire to injure, murder and destroy Americans and our nation.

Forgetting 9/11 breeds complacency, and complacency is a luxury Americans can no longer afford. Those who hate will look for a weakness to exploit. Who can say the computer viruses that are launched on our technology-dependent society aren’t another form of terrorism.

We all must remember what happened seven years ago, to keep it from happening again.

‘Things That Go’ Another Success!Golden Notes Of Archbold’s Memorable PastMust It Take Tragedy To Unite Us?