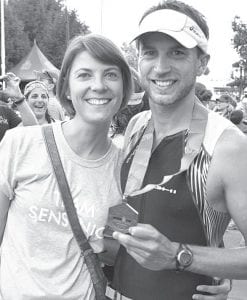 Jesse Sensenig, right, with his wife, Amanda, after completing the Iron Man Triathlon event in Madison, Wis., last month. Amanda wears a “Team Sensenig” T-shirt, which was worn by family members who traveled to Wisconsin to see Jesse race. Jesse said his wife was supportive of his decision to compete, “though she thought I was kind of nuts.” –courtesy photo

An Iron Man triathlon is composed of three events: a 2.4-mile open-water swim followed by a 112-mile bicycle race, followed by a marathon-length run of 26.2 miles.

Alone, any one of the three is physically demanding. Together, an Iron Man event is perhaps one of the most diffi cult, most punishing, most grueling events in the world of sports.

He said before the event, he didn’t want to set too many goals beyond finishing, and if he finished in less than 12 hours, he would have done “pretty good.”

Sensenig and his wife Amanda lived in Colorado for a few years before returning to Ohio. Today, the couple lives in Bluffton, where Amanda is a professor at Bluffton University and he is a social worker in Lima.

He ran a marathon five years ago, and loves bicycling in the mountains.

“But in the back of my head,” there was Iron Man.

“It was something that intrigued me. Something about that (Iron Man), that people would willingly put themselves through the challenge and test.”

Sensenig said he couldn’t put his finger on a specific day he said, “I will do the Iron Man.”

“It was something I was going to do. I didn’t speak out loud about it, but it was a long-term goal.”

“I thought about it for two years before I signed up,” a year in advance of the 2010 event.

“That moment was when I made my decision,” he said.

His training began. “I didn’t follow any specifi c program. I was probably running five miles (each training session). I increased that 10% each week. I kept increasing the bike ride. I kept building up my long endurance skills,” he said.

He also did speed training to pick up his pace. He learned more about training by talking to others.

He also got plenty of rest.

About two weeks before the event, he began tapering off, giving his body time to relax.

When asked about his diet, Sensenig said, “I ate more.”

“I was telling my wife, I could eat a decent amount and not feel full. In an hour, I was ready to eat another meal.

“I ate pretty healthy. I upped my carbs (carbohydrates) to 70% of my diet towards the end.”

On the day of the event, Sensenig said he was a little nervous.

“Mostly, I was nervous about a mechanical thing going wrong on the bike, or something happening that would keep me from finishing,” he said.

“I was also worried about the weather, whether it would be super hot for the run, or cold. The weather wasn’t a problem. Temperatures in the low 70s, low winds.

“I was mentally prepared, physically prepared, and mostly excited. It was really intense, really emotional. Quite an experience,” he said.

He had been warned the swim portion of the event was full contact.

"The first quarter-mile, 2700 people going at the same time; before they spread out, it’s full contact.

“I got hit in the head, I was hitting people. You try not to, but it’s pretty wild. At the turn, you have to doggie paddle, it’s so tight.”

He moved to the bike, and did pretty well. “I felt good, and ran a good pace.

“At the start of the run, I had some stomach cramping, but that cleared up.”

Along the route were lots of spectators, including about 15 members of his family wearing “Team Sensenig” tshirts.

“There were a lot of spectators. They keep you going,” he said.

Sensenig said as he looked at his background and checked things off, Iron Man was another event to put in the “did that” column.

“I haven’t signed up for anything yet. I’m not quite sure what’s next.

“I don’t know of too many greater challenges than Iron Man. This may be the one and only time.

“It was a great overall experience.”