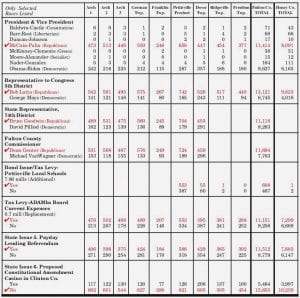 Pettisville voters approved a new school building, and Dean Genter has been reelected to a third term as Fulton County Commissioner.

Those are some local results from the Tuesday, Nov. 4, general election.

Steve Switzer, district superintendent, said he believes if a good proposal is put before the voters, the voters will support it.

This year, the economy was the wild card.

“I was very pleased to see the confidence people have placed in the (school) board and the support they have given us,” Switzer said.

Switzer said he felt very positive about the vote based on what people were saying to him, “but you’re always cautious.

“The general feedback was, ‘I’ll support you, but I don’t know about a lot of others,'” he said.

The bulk of the $21-million new Pettisville school is being funded by the Ohio School Facilities Commission. The commission will pay about $17.56 million, or roughly 82% of the cost.

Pettisville voters approved a $4.83 million bond issue, which requires a 7.36-mill, 28-year levy to repay. The OSFC also requires the district to pass a half-mill, permanent levy for operation and maintenance of the building, making the total millage 7.86.

For the owner of a $100,000 home in the Pettisville School District, the new school will drive up the property tax bill by $240 per year.

Genter, a Republican from rural Pettisville, defeated Democratic challenger Michael T. VanWagner, Swanton, 11,694 to 7,703. In percentage terms, it was 60.29% for Genter and 39.71% for VanWagner.

“I look forward to serving the citizens of Fulton County for another four years.

“We have a lot of challenges to look at, but we’ve got a good team with commissioner (Joe) Short and commissioner (Paul) Barnaby,” Genter said.

Barnaby was unopposed in his bid for reelection, earning 14,818 votes.

A commissioner serves a fouryear term. When Genter completes his third term in 2013, he will have served 12 years.

When asked about challenges, Genter said, “With the economy the way it is, we’re trying to work within our means without having to increase tax dollars.

“We continue to be mandated to provide services to the county residents,” he said. That’s diffi cult to do, because of ever-increasing costs.

At approximately 12:45 am, Wednesday, Bob Latta, U.S. Representative (R-Bowling Green), was leading Democratic challenger George Mays, Norwalk, with 65% of the votes. At that time, 75% of precincts in the large Fifth Congressional District had reported their results.

At that same time, Bruce Goodwin, state representative (R-Defiance) was leading his challenger, David Pilliod, a Democrat, Swanton, with 62% of the votes cast. About 73% of the precincts in the 74th Ohio House District, which includes Fulton County, had reported.

Among the unopposed Henry County candidates, John Nye, sheriff, received the most votes, with 11,334 cast.

Two Napoleon city charter amendments were voted down. The Flatrock Township liquor option was approved 183 to 51.

Voter turnout in Fulton County was 73%, off predictions of between 80% and 85%. In the 2004 presidential election, Fulton County set its turnout record of 78%.

Fulton County totals include all absentee ballots and ballots cast on paper rather than on touch-screen voting machines.

The Tuesday night count is considered unofficial. The board will meet Monday, Nov. 17 to conduct the official count.

Totals don’t include about 650 provisional ballots, which will be checked, then counted, during the official count.

As of 1 a.m., Wednesday morning, with 75% of Ohio precincts reporting, State Issue 1, a proposed constitutional amendment for an earlier filing deadline for statewide ballot issues, was being approved 69% to 31% statewide.

State Issue 2, a proposed constitutional amendment to authorize the state of Ohio to issue bonds for environmental revitalization and conservation, was passing 69% to 31%.

State Issue 4, a referendum on legislation making changes to check cashing lending, sometimes known as “payday lenders,” was being approved 64% to 36%.

State Issue 5, a proposed constitutional amendment by initiative petition for a casino near Wilmington, was being defeated 63% to 37%.