Second Season Just Around The Corner For Schultz 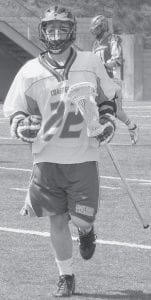 “The coaching staff calls him the ‘lab,’ as in Black Labrador, because he has a nose for the ball, pursues the action all over the field, and never tires,” said Scott Ostrowski, a lieutenant who is the United States Coast Guard Academy head lacrosse coach.

In some relatively small communities, high school athletes have just a few sports programs to choose from. Once graduated many pursue other avenues of athletics.

For Chase Schultz, a 2005 Archbold High School graduate, he took him to lacrosse.

Schultz, a third class cadet (sophomore) at the USCGA in New London, Conn., enters his second season as a member of the men’s lacrosse team. Schultz earned playing time in his first season after spending a stint on the B squad.

“Chase’s performance and development as a player last year was remarkable and highly unusual for a sport requiring the sticks skills of lacrosse,” said Ostrowski.

“With Chase being completely new to the sport, I placed him on the ‘B’ team practices for new skills and developing players. He was a natural to the sport, and it became immediately clear to coach Conner, the fundamentals coach, and me that Chase deserved a serious look with the regular players.

“His impact with the experienced players was immediate and significant. As a result, he began seeing regular playing time and became a contributor at midfield by about halfway through the season.”

While a club sport at the Academy, the competition is tough for the Bears, playing in the Pioneer Collegiate Lacrosse League. The Bears dropped down to Division II for the coming season.

They faced tough competition in the University of Connecticut and Boston College last year. They face UConn again this year, coupled with a very competitive schedule.

As a general guideline at the Academy, players cannot miss class or military obligations for club sports, whereas they can for NCAA events.

Listed at 5’10” and 185 pounds, midfielder Schultz has grown up since his 140-pound wrestling days at Archbold, and as stated by Ostrowski has earned the nickname, the Lab.

Schultz’s added growth is a plus in lacrosse.

“Chase is a natural athlete and has toughness,” said Ostrowski. “He is easily the most physical player on the team.

“He is not afraid to take a hit to complete a play, and is always looking to give one out.”

That physical play led to what coach Ostrowski describes as one of his scariest moments.

“Last season I had one of my scariest moments as a coach when Chase was placed on a backboard and taken to the hospital as a safety precaution,” said the coach.

“He delivered a punishing hit, but one with poor form. As a result of that incident, all players on the team will be prescreened for concussions prior to the season and more hitting drills will be incorporated into practice.

“I have interacted with Chase not only as a coach, but also as his calculus instructor and his academic advisor. From the beginning I was impressed with his insight, work ethic and positive attitude that he brought not only to the lacrosse field, but also to academics.

“I expect Chase to see regular playing time on one of our primary midfield lines, as well as being one of the team’s best face-off specialists.”

The men’s lacrosse team kicks off its 2008 season in early March, but has already had an off-season game against the University of Rhode Island. Schultz earned the “Hit Coin,” given to players who record the best hit or hits of the game.

The Bears lost just three players to graduation last year, and seven returning starters, including their leading scorer and the entire defense, could look favorable for the team.

The Bears made the move to Div. II this year and will play against schools of similar size.

The PCLL competes at the national level in the Men’s Collegiate Lacrosse Association. The winner of the conference tournament receives an automatic bid to the national MCLA tournament.

The MCLA and PCLL are a collection of non-varsity and college programs that compete on the intercollegiate level.