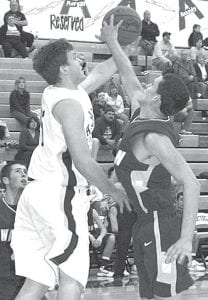 Tyson Dietrich, left, attempts to avoid the outstretched paw of a Bulldog and put up a shot. Dietrich led the Streaks with 12 points.–photo by Scott Schultz

Overcoming a sluggish first half, the Streaks used a big second half to record the win. AHS Leads 14-4

The Blue and Gold jumped out to an 11-0 lead in the opening minutes. The Bulldogs, led by 14 points from Travis Hilton, finally broke into the scoring column at the 3:12 mark of the first quarter.

Hilton had all four of his team’s first-quarter points as the Streaks led 14-4 after one.

Swanton outscored Archbold 8-5 in the second period, but AHS still held a 19-12 lead at the midway point. Streaks Widen Gap

Swanton cut into the defi- cit to start the second half. Shane Bloom came up with a turnover and outraced the Streaks for two points, narrowing the gap to 19-14.

“I don’t have an answer for the way we played in the first half,” said Doug Krauss, AHS head coach. “I wish I could say we had an intelligent conversion at halftime, but it wasn’t.

“We just told the guys we have to take care of the basketball. We have to move, play smarter and attack; we just can’t pass against the zone defense.”

Finding a weak spot in the defense, Archbold’s Tyson Dietrich took over underneath, scoring on a five-footer. The Dogs answered with a deuce from Hilton.

Dietrich added to his game-high 12 points with a short jumper and Garrett Morton buried a three-pointer for a 26-16 AHS lead.

“We didn’t move the ball around against that zone defense in that first half,” said Krauss. “We did a better job in the second and that opens up your interior people.

“We have a couple of guys that can score underneath, Tyson is getting better under there, and that is good to see.”

The Streaks continued to pull away with a Dietrich shot underneath. Zeb Frank nailed a three from the corner for a 31-18 lead.

Swanton added one from the foul line, but Archbold closed out the quarter by scoring the next six points for a 37-19 advantage.

Archbold outscored the Bulldogs 19-9 in the final eight minutes for the 56-28 final.

Morton, Luke Kammeyer, and Telly Fricke each chipped in seven points in the win.

“We did have balanced scoring, and I think we are a pretty good squad,” said Krauss. “We force teams to guard more than one guy on the floor. That makes you tougher to guard and gives us more opportunities.

“We always have things we can work on. Give coach Smith and Swanton a lot of credit; they did a nice job with the zone defense. They move well and caused some problems for us.

“We told our guys it doesn’t mean a thing,” said Krauss. “It is recognition, but it’s not helping us do anything that we want to accomplish.

“We can’t control how people vote. It means that people recognize our program; not just this year’s squad, but past years’ squads also.”