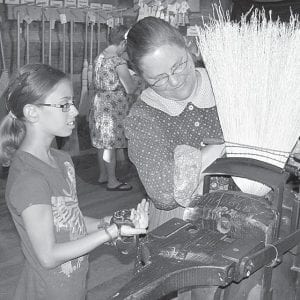 Nancy Lewis, right, a broom shop artisan at Sauder Village, demonstrates the art and craft of broom-making to a guest. Broom-making is just one of several arts and crafts on display at the historic village. Sauder Village will be open through Sunday, Oct. 27.– courtesy photo

Jeanette Smith, director of sales and marketing at Sauder Village, said things have been going well this season.

“Attendance has been great, and guests have been coming from all over to visit this local treasure,” she said.

The collection was displayed only at the Sauder Village show, and drew rughooking enthusiasts from all parts of the U.S.

There was also a display of hooked rugs made of each United States president.

The display included knitted figurines of each of the 44 presidents. Those figurines are still on display at the village.

The collection was featured in USA Today, a national newspaper.