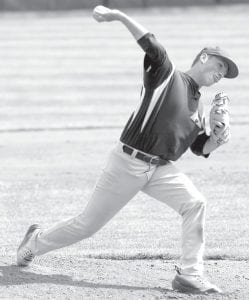 Ben Bucklew delivers a pitch to Clear Fork’s Thomas Staab. Bucklew finished his senior season with a 7-1 record after the Streaks fell to the Colts 4-3 in the Div. III regional final.– photo by Mary Huber

The magical tournament run by the Archbold baseball team came to an end at Elida, Friday, May 27, in the finals of the Division III regional tournament as Clear Fork (19-12) edged the Streaks 4-3.

Archbold jumped out to a 2-0 lead in the first inning on runs batted in by Ben Bucklew and Lathon Babcock.

The Streaks added a run in the top of the third inning to lead 3-0 as Toby Walker got his first of three hits on the day, eventually scoring on an error by the Colts’ third baseman.

Then the bottom fell out for Archbold.

In the bottom of the inning, Clear Fork had the bases loaded when Caleb Merendino’s sacrifice bunt scored pitcher Mitch Dulin.

After an intentional walk, two wild pitches resulted in Mason Cox and Thomas Staab crossing the plate for a tie at 3.

Clear Fork relief pitcher Jalen Sheriff came on in the fifth inning with the bases loaded and no outs for Archbold. 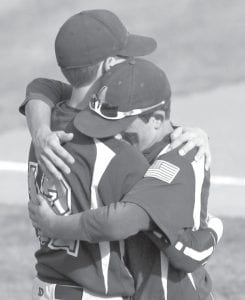 Sheriff shut AHS down, preventing the Streaks from making the coveted trip to the state tournament.

Even though starter Ben Bucklew allowed only one earned run in three innings, he suffered his first loss of the season on the mound to finish 7-1. Sophomore Trevor Rupp came on in relief and shut out the Colts in his three innings of work.

“I couldn’t be prouder of the way these guys went out and competed game in and game out,” said Dick Selgo, AHS head coach.

“They gave it everything they had, every game, all season long.

“We also had a number of good young players that gained a lot of very valuable experience this year.

We also appreciate all the support our fans gave us, especially down the tournament trail.

Centerfielder Toby Walker catches a deep fly ball for the third out of the third inning.– photo by Mary Huber

“Even though the final loss stings, our players will have some very special memories of this season as time goes on.”

Archbold finishes with a record of 22-9, the third time in the last four years that the Streaks have won 20 games or more.