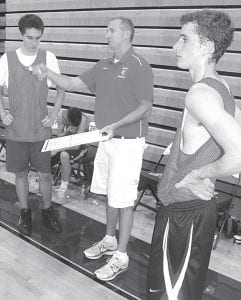 Sean Lauber, center, coach of the Iroquois (N.Y.) High School Chiefs, talks strategy with his players during a break in their game against Pettisville, Friday, July 20. At left is Alex Popovski; at right, Matt Zimmerman. IHS is located outside Buffalo. Lauber brought the team to his hometown of Archbold so they could see where he grew up, and play some local teams.– photo by David Pugh

Sean Lauber had a homecoming of sorts recently, returning to Archbold High School, where he graduated in 1988.

But the trip wasn’t the usual “catch-up-with-theold gang” kind of visit.

Instead, Lauber, who is the boys basketball coach at Iroquois High School, located outside Buffalo, N.Y., brought six members of his team to scrimmage with four Ohio teams: Archbold, Pettisville, Perrysburg, and North Central.

The Chiefs defeated Pettisville, but lost by three points to Archbold. Both games were played at the AHS gym.

The Chiefs lost to the Yellow Jackets at Perrysburg, then lost to North Central at AHS.

The games were arranged over the previous winter and spring.

Lauber said he was home in Archbold with his parents, Edward and Bonnie Lauber, over Christmas. While he was here, he met with Doug Krauss, his AHS coach.

Over the following months, the two, and the other coaches corresponded by email, and made all the arrangements.

Lauber said the games were learning experiences for his players.

“We learned a lot on both sides of the ball, “ he said.

From Pettisville, they learned how patient the Blackbirds were in setting up their offense.

Unlike Ohio, New York has a shot clock in high school basketball, which Lauber said can lead teams to a “run-and-gun” offense.

In “run-and-gun,” players get down the court as fast as they can and shoot at the first opportunity.

He said the Chiefs might look into implementing Pettisville’s style of offense.

Lauber said the Chiefs started well against Archbold, but it was their second game of the day and by the second half, his boys were losing their focus.

“It was a great game, and it was great to play against Archbold,” he said.

The Perrysburg game was set up through Lauber’s sister.

“A good friend of my sister lives in Whitehouse and knows the coach at Perrysburg,” Lauber explained.

Against Perrysburg, his team struggled against a much bigger squad. And, since it was their third game in two days, “by halftime, they were pretty tired.”

Next, they played North Central. One of his players was injured, so there were no substitutes available. The five that were left played the entire game.

Lauber said the boys on his team got a chance to see where their coach grew up.

While in Archbold, the boys, and one of the boy’s fathers, stayed at his parents’ home.

In addition to basketball, the boys were in Archbold for the Carp Festival and went bowling.

After graduating from AHS, Lauber, known as “Newt” to his friends, went to Bowling Green State University, where he played volleyball in addition to studying for a bachelor’s degree. He graduated in 1993.

He spent three years living in Southern California, where he was a special education teacher, basketball, and volleyball coach.

For the past 16 years, he’s been a special education teacher and coach in the Iroquois Central School District. Located in Elam, N.Y., the school is about 14 miles from Buffalo.

Did the boys enjoy their stay in Archbold?

“They had a great time hanging out in town and meeting everyone,” Lauber said.

“We’re hoping on coming back next year.”