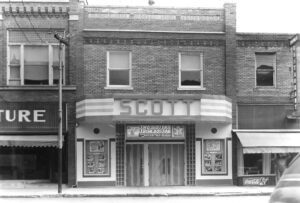 The Scott Theatre before the Feb. 20, 1972 fire.– photos from the Archbold Buckeye archives

(Editor’s Note: The following was originally published in the Feb. 23, 1972 edition of the Archbold Buckeye.)

Fire was discovered at about 2 a.m. Sunday morning in the Scott Theatre, 120 N. Defiance St.

It caused nearly $100,000 damage to three buildings and contents, according to Fire Chief Willard DeGroff.

Mr. and Mrs. Thos. A. Scott left the theatre at about 12:45 and did not see any evidence of fire.

About 50 firemen, using 11 pieces of equipment, battled the fire until about 4:40 a.m., before having it under control. About 100,000 gallons of water from Archbold’s municipal system was used in fighting the fire, according to Nolan Tuckerman, superintendent. 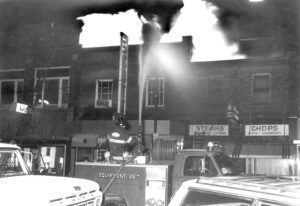 Cold weather hampered the efforts of firefighters battling the Scott Theatre fire on Feb. 20, 1972. Fire hoses froze, and the alley behind the buildings on the east side of the street had a coating of ice. The loss was around $100,000, and 50 firemen and 11 pieces of equipment battled the blaze.

Four young men, Tom Christy, Mike McRobbie, Tom Storrer and Paul Keim were driving through the business area at about 2 a.m. and discovered the fire.

One ran to the police station in the municipal building and found that police were on patrol duty. Another ran to the Chas. A. Schnitkey home on Pleasant Street to sound the alarm.

Tom Christy drove to the Carriage House on Stryker Street, notified Allen Dominique who turned in the alarm at 2:10 a.m., summoning all Archbold firemen.

When Chief DeGroff and firemen reached the theatre, smoke was pouring out the front doors and flames were burning through the roof at the rear of the 125-foot long building.

Flames rose 20 feet above the building and fire brands were being carried over a wide area. DeGroff summoned Wauseon’s fire department, and also asked for help from Bryan, urging them to bring their new Snorkel equipment.

Mr. DeGroff feared another block-long fire was in the making, much like the 1913 blaze that wiped out most of the east side of the business district.

Wauseon’s fire department was fighting the blaze of an automobile when alerted. They came immediately with five pieces of equipment and 20 men, and soon had their equipment in operation with several lines of hose pouring big streams of water on the buildings.

Within 20 minutes after being summoned, Bryan’s department, with 10 men, and the new Snorkel truck arrived. The Snorkel was stationed in front of Scott Theatre, and with several men in the “basket” soon had a great volume of water pouring on the raging fire.

Water was shot through second-story windows of the theatre and with the basket high above the building, deluged the hot fire with water under great pressure.

Archbold and Wauseon firemen fought the fire from the alley, pouring great quantities of water on the stubborn blaze.

Hess’ Shoe Store had only smoke damage, and Thriftland Store had water damage in their rear storage room as well as smoke damage.

Bryan’s Snorkel truck, purchased two years ago, was used for the first time in Archbold to fight the theatre fire. Water was poured on the fire from every direction until 4:40 a.m., when it appeared to be under control.

Wauseon firemen, with their equipment, and Bryan’s firemen with their giant Snorkel truck left Archbold at about 5:15 a.m.

Food and hot coffee was served from Ickey’s and the Carriage House and also from Wauseon’s first aid canteen truck.

Chief DeGroff said firemen battled fire with at least a half-inch of ice coating their helmets.

The temperature was 10 degrees, and the chill factor contributed to the problem.

Fire walls on the north and south side of the Scott Theatre building helped in confining the blaze to the movie house and saved adjoining structures from catching fire.

Nolan Tuckerman had a crew of men on duty at the water filtration plant pumping more water into the mains from reserve storage, augmented by water filtered as fast as it could be produced.

Miss Betty Scott, daughter of Mr. and Mrs. Thomas A. Scott, Tallahassee, Fla., had a stamp collection valued at between $7,000 and $8,000 stored in the theatre office.

A search made by Willard DeGroff and firemen located some of the stamps Sunday morning.

Miss Scott flew home to try and salvage some of the stamps, working all day Monday hoping to recover one-third of the loss.

WHFD-FM, Archbold radio station, had left the air at midnight, but returned shortly after 2 a.m.

The staff remained on duty until after 5 a.m., giving a detailed account of the fire and the heroic efforts to save the business district from destruction.

Scott Theatre was opened Oct. 28, 1944, and for over 27 years the Scotts have presented excellent entertainment for moviegoers.

Known as “Northwestern Ohio’s Finest Little Theatre,” there were originally 324 seats, and a few years ago were reduced to 288 when the new wide screen was installed.

The Scotts sold the Grove Theatre in Columbus Grove, came to Archbold, purchased the J.P. Rinkel building used as a grocery store, and converted it into a movie house.

Thomas A. Scott has not decided if the theatre is to be rebuilt. It has been important to the community and was the only indoor movie house in Fulton County.

At one time, Fayette, Lyons, Metamora, Swanton, and Delta each had one theatre and Wauseon had two. All have been closed, Wauseon’s theatres closing about 10 years ago.

Fire Chief Willard De- Groff and all citizens of the community greatly appreciate the cooperation they received from Wauseon and Bryan departments in fighting the fire.

Fayette’s department was on standby duty ready to aid, if needed.

Monday afternoon, Archbold firemen pumped water out of the projection room at Scott Theatre and also from the basement at the rear of the structure.

From all evidence they could find, it appeared that fire must have started in the hot air ducts, and traveled to the second floor and spread the flames to the center and front of the building.