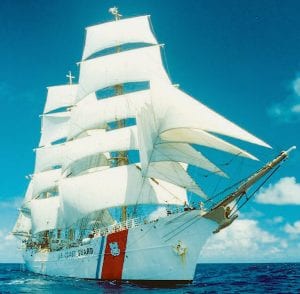 And he wouldn’t have traded it for any other experience in the world.

For Chase, it was a working cruise. As a member of the cadre, the upper-level cadets, he spent time training the swabs, or academy freshmen. As a result, Scott didn’t get to spend much time with his son.

But he got to watch Chase performing his duties, climbing the rigging, and teaching others.

The Eagle is a four-masted sailing vessel, the only squarerigged sailing ship in U.S. government service. 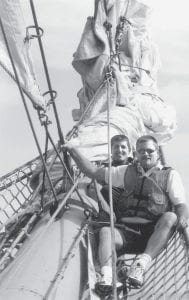 Hanging Out Scott Schultz, foreground, with son Chase, a Coast Guard Academy cadet, aboard the Coast Guard ship Eagle. They are sitting in the netting of the ship’s bowsprit, a boom on the bow, to which some of the ship’s rigging attaches. They are suspended over the Pacific Ocean. – courtesy photo

Scott describes the Eagle as a “classroom on the water.”

Why use a sailing ship in the 21st Century? Scott said on every ship, sailors deal with two things: weather and water.

The cadre learn leadership at sea; the swabs learn seamanship, and the importance of teamwork.

Scott was one of 15 parents selected to join their sons and daughters aboard the Eagle. As a guest, he could attend classes and participate in other activities.

“I went to everything I could,” he said.

There were classes on knot tying, fire drills, abandon ship drills, even instruction on how to operate a sextant.

As the swabs completed certain tasks, they had the accomplishment noted in a booklet.

One of the tasks was called Up And Over. The swabs, and Scott, climbed one side of the shrouds, the rope ladders that reach from the side of the ship to the top of the masts, to the first yardarm, or cross piece on the mast. They then had to go across the yardarm and back down the other side.

Later, Scott said Chase took him up the rigging to the first yardarm, about 40 feet up. While he was wearing a safety harness, it wasn’t connected to anything as he climbed the rigging.

When he got to the yardarm, he was standing on a one-inch line (on a ship, Scott said it’s never a “rope.” It’s always a “line.”).

Chase told him to hook up his safety harness.

Scott said his son tried to coax him out onto the yardarm, but he was happy to remain where he was.

Eagle’s home port is at the academy at New London, Conn. Scott met the ship in San Diego, Calif., and sailed with her to Los Angeles.

For Scott, the defining moment of the trip came on Thursday night. That night, the cadre prepared pizza for everyone and they had an evening off.

One particular swab was having an especially difficult time climbing the rigging.

Scott said as everyone was eating, Chase took the young cadet, put him into the safety harness, and took him up to the top of the mast, 145 feet up.

On deck, the swab’s friends cheered at every new level he reached, as Chase led him up each step of the way.

“You could tell for the swab, every step was a struggle,” Scott said.

“But at that moment, for me to see how much Chase had grown…”

Scott didn’t finish the sentence. He didn’t have to. You could hear the pride in the father’s voice.