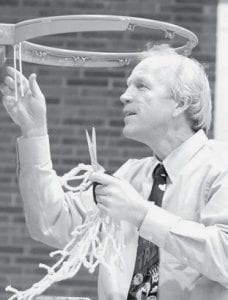 Kevin “Scoop” Miller cuts down the net after the AHS girls basketball team won a sectional championship in 2008. – photo by Jaycee Riley

Kevin “Scoop” Miller is all about coaching.

“I grew up sitting on the end of the bench. I spent a lot of halftimes in locker rooms.

“I always had a passion for athletics. I always knew I wanted to be in education and coaching.”

Miller has coached a variety of sports since 1986. He joined the Archbold Area School District staff in 1992 as a physical education teacher at Archbold Middle School. He’s been coaching in the school district since 1993.

Last month, the Archbold Area School Board opted not to offer him a supplemental contract as the head Archbold High School girls basketball coach, a post he’d held for 10 years.

“It was just like somebody cutting a dream away from you,” he said.

But he said he is not bitter.

“Somehow, the Lord has prepared me for this. Five years ago, ten years ago, I’m not sure how I could handle this, because basketball has been a huge part of my life since I could walk.

“My faith has let me know the Lord is in charge of my life. If he has opened another door for me, I’m going to walk through that door.

“I’m disappointed I was nonrenewed for basketball. But I know the Lord is going to make something great out of this. He’s the one that’s in charge.”

Archbold Area School Board members have not commented about the reasons for not renewing Miller’s coaching contract.

Scott Miller, board president, said in an Aug. 20, 2008 article that the reasons, “are personnel matters I can’t get in to. The board wants to go a different direction.”

“When I could finally get words out of my mouth, the only word I could get out was, ‘why?'”

He said Deskins gave him a series of reasons.

Miller said the reasons were

•Allowing equipment bags to remain in the aisle of a school bus he was driving.

Miller said there were two teams on the bus and there were 30 equipment bags. The bus had no other storage area available.

Miller said his driving record, as a school bus driver and a “civilian,” is clean.

“I’ve never had a ticket. I’ve never caused an accident,” he said.

•Failure to give students enough notice for a summer basketball camp.

Miller said he discussed possible dates for the camp when the girls basketball players turned in their uniforms from the previous season.

At the time, it was softball season, and many girls played both sports.

He said the coaches didn’t want to distract the softball team with discussion about basketball camp during the most important part of their season.

“The morning after the softball team lost in regionals, we sent an email to our players announcing basketball camp,” he said.

•Issues with Archbold Parks and Recreation.

Miller said, “There are a couple of people in Parks and Recreation who do not like me, and that was causing a strain on school -parks and recreation relations.”

“During that time, I made it pretty clear we’re working for the same kids,” he said.

•An issue of money-handling in reference to summer baseball uniforms.

Miller said he collected money for Acme and Junior Acme uniform shirts, which were imprinted by a local firm.

Later, he said he learned the Junior Acme shirts were paid for by Parks and Recreation. So the checks for those shirts should have gone to Parks and Rec., instead of the local firm, even though the local firm sent the bill to him.

Miller believes none of the offenses rises to a level that would justify failing to renew his coaching contract.

He said he was never given any warning that his coaching position was in jeopardy.

“Even the people who don’t like me would say that was wrong.”

Deskins was contacted prior to the publication of this article.

He said the school board “is not inclined to discuss specific personnel matters in the media, and therefore, offers no comment at this time.”

Miller said he has experienced an outpouring of support.

“The community has just been great throughout this whole process.”

The number of people who have called, sent emails, or even stopped by his home “has been uplifting for me.”

Several people offered to attend the Monday night, Sept. 15, school board meeting on his behalf, but he told them no.

“I don’t want those people to be in the middle of this,” he said.

He said this could be an opportunity to show youngsters how to “walk tall” and be strong, “even when things are not going your way.”

Miller said he and other coaches in the school district, just like the community, want to know why his contract was not renewed.

“To me, that’s a very fair question.”

Miller said he has reapplied for the head girls basketball coaching contract.

“I’m still hoping things will get worked out for the best,” he said.