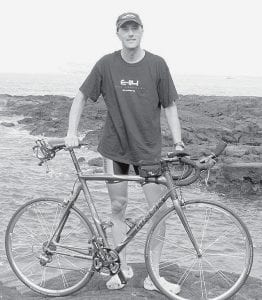 Brian Schweinhagen stands on lava formations on the coast of Kona, the Big Island of Hawaii. After 13 years of entering, Schweinhagen got the chance to participate in the Ironman Triathlon, held annually on the island. He’s shown her with his racing bike. Bikes for serious Ironman contenders cost anywhere from $3,000 to $12,000, he said.- courtesy photo

The Ironman Triathlon probably is the most grueling athletic event in the world.

Ironman was started in 1978 by a group of elite U.S. Navy commandos, known as the SEALS.

The world championship in Hawaii is the Super Bowl or World Series of triathlon competitions.

He did a summersault at the finish line.

“It’s my signature move,” he said.

He had three goals. The first was to finish. The second was to do better than he did in his last full Ironman event in 2006. He accomplished that goal.

The third was to break 13 hours.

After earning his AHS diploma, Schweinhagen studied at Bowling Green State University. He graduated in 1991 with a computer science degree.

Today, he lives in Los Angeles with his wife Homyra, and their daughter, Parisa, 3 1/2.

Schweinhagen became a triathlon athlete in the mid- 1990s.

Although he was never the fastest swimmer, biker, or runner, by combining the three disciplines, he always placed well in his age group.

To train for the Ironman, he swims one hour three times a week and runs twice a week.

His passion for the bicycle ride has grown over the years.

When preparing for an event, he rides every weekend, sometimes riding up to 60 to 100 miles.

He trains so much he eats whatever he wants. Brian is 6 feet, 1 inch, and weighs 170 pounds. His weight rarely fluctuates.

It is next to impossible for the common man to qualify for the Hawaiian event. There is a lottery system for 200 athletes to join the 1,600 other competitors.

Schweinhagen said he entered the lottery every year for 13 years. He was notified he’d been selected in April.

Once an athlete is selected for a lottery spot, he has to complete either a half (70.3 total miles) or a full Ironman event. With only six months to get ready, he competed in a half event in Boise, Idaho, finishing in 5:44.

Schweinhagen said the best part of the race is at the start.

“You’re in the water; you kind of take a minute and take it all in. You see the sunrise, you realize you’ve been watching the race on TV for 15 years, and after all the hard work, you’re finally here.”

The race itself is grueling. The heat and wind are notorious.

During the 112-mile bike ride, “The first 30 miles are a breeze. Then you kind of make a turn. From there, it’s uphill into the wind. The gusts were 20 to 40 miles an hour, so in spots, you’re gripping the handlebars, hanging on for dear life.

“You see people in front of you blown all over the road, so you have time to brace yourself.

“In the flat ground, you can do 21 miles per hour pretty effortlessly.”

In the hills, the bicyclist’s speed is down to seven mph, and “it takes every ounce of strength.”

When he got off the bike, he had conserved enough strength that he ran a solid marathon. He finished that portion of the event in 4:32, just 16 minutes off his last marathon time of 4:16.

Triathlons, and training for competitions, becomes a lifestyle.

He keeps company with likeminded people.

“It’s my social outlet. We go out and train, then get together afterwards.”

The competitive lifestyle is spreading to the rest of the family.

The Schweinhagens arrived in Hawaii a week early. Their plane landed about midnight.

At 7 a.m. the next day, Homyra ran her first five-kilometer race.

(Editor’s note: This year’s Ironman World Championships will air on the NBC network from 2:30 to 4 pm, Saturday, Dec. 13.)