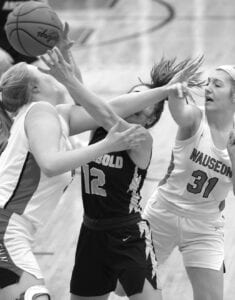 Karsyn Hostetler (12) is fouled by Wauseon’s Kadence Carroll (31) as they go for a rebound. Wauseon’s Hayley Meyer, left, also gets in on the action.– photo by Mary Huber

(Editor’s Note: Video of the final 3.4 seconds of the game, including the gamewinning shot, may be viewed on the Archbold Buckeye Facebook page.)

“Coach (Brian Ziegler) was standing right there,” said Sauder. “I was super nervous ‘cause the game winner was on me and coach said, ‘You got this,’ and all of a sudden I got the ball and shot it and made it and he started screaming.”

“You leave it up to your senior,” said Ziegler of the last play. “She’s put in extra time here and you want the ball in her hands.

“She just gutted the whole game out. She had some open looks and didn’t hit them.

“Harley (Phillips) made a great pass to her, too. The passer gets just as much credit also.

“(To) hit that shot at the buzzer– she’s going to remember that one for a while.”

The sectional semifinal win took some sting out of the first two times the teams met this season. Wauseon edged the Streaks 40-39 on Nov. 28, and then beat Archbold 47-39 in their league opener on Jan. 18.

“This went better than the last time we were here,” said Ziegler.

“We didn’t even bring up the first two games this whole week of practice. The girls were motivated; we didn’t have to say anything. It’s tournament time.

“Those games were out and didn’t matter anymore. We just worked on… a good defensive game plan, which I thought the girls carried out pretty well.

“I think whoever had the last shot maybe had a good chance of winning this game, it was so back and forth.

“I thought our girls just executed very well down the stretch.”

Wauseon led 8-2 after the first quarter. Sauder scored Archbold’s basket with 3:15 left in the period.

The Streaks closed the difference to one, 12-11.

Archbold took its first lead of the game, 17-16, when Addi Ziegler scored off a loose ball with 3:10 left in the third.

Wauseon took the lead right back on a Marisa Seiler basket.

Sauder got the lead back for AHS with a basket and 1:09 left in the period, and the Streaks went into the final eight minutes leading 19-18.

The lead went back and forth in the fourth quarter, and the score was tied with 51 seconds left in regulation when Wauseon’s Chelsea Raabe scored underneath the bucket.

With 3.4 seconds left, Sauder and Karsyn Hostetler were lined up for the inbounds pass from Phillips, who was just to the right of the key. Hostetler drew her defender to the side of the court, Sauder ran to the ball, drawing two defenders, and put up the winning shot over their outstretched arms about eight feet from the basket.

Sauder led the Streaks with 10 points.

Seiler and Hayley Meyer had all but two of Wauseon’s 27 points. Meyer scored 14 and Seiler finished with 11.