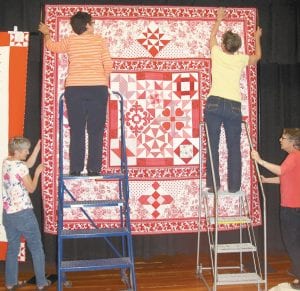 These women were among several persons who were busy Monday, April 25, preparing the 2016 Sauder Village Quilt Show. From left: Bonnie Stuckey, West Unity; Suzie Rupp, rural Stryker; Linda Stuckey, Archbold, and Karen Short, rural Archbold. The quilt is one of several of a special exhibit, “A Ruby Red Celebration,” in honor of the 40th anniversary of the quilt show.– photo by David Pugh

Sauder Village and its annual quilt show are celebrating 40 years this season.

Sauder Village opened to the public on June 14, 1976. The same year, the village presented its first quilt show.

The quilt show and the village opened for the season yesterday, Tuesday.

“This is our longest standing event. We’ve had one since the very beginning,” Kim Krieger, public and media relations specialist for Sauder Village, said Monday.

Linda Rufenacht, director of the quilt show, said, “We are doing a red and white exhibit. We’re calling it ‘A Ruby Red Celebration’ for the 40th anniversary, because the ruby is the gemstone of 40th anniversaries.”

The special exhibit includes “antique, contemporary, as well as vintage quilts from all eras, some from back in the 1800s to very recent quilts,” Rufenacht said.

The quilts are on loan to Sauder Village from area families.

“They’re people I contacted in the area– the Toledo region. They’re on loan specifically for this exhibit for this week,” she said.

Between 350 and 400 quilts are on display, including special exhibits.

Rufenacht said the quilt show brings in people “from quite a distance from throughout the Midwest– Michigan, Indiana, and Ohio, primarily, because we’re right up here in the corner (of the three states).

“But we get people from lots of areas. Some people even mail in their quilts from farther away to be in the show.”

“There are lots of quilt shows in the quilt world. There are a lot of shows put on by big production companies. We’re more of an independent type.

“I would say in this region, we’re well known as a good quilt show to attend because of the quantity, as well as the quality.

“We have a pretty good reputation.”

One trend Rufenacht spotted this year is toward smaller quilts.

“People tend to be making smaller quilts, rather than the really, really large quilts,” she said.

“They want to make a lot more of them, so they tend to be a little smaller.

“But we still have the nice, traditional big bed quilts as well.”

The quilt show runs through 4 pm, Sunday, May 1.

Krieger said those at Sauder Village are excited to be opening for the 40th season.

The first is an exhibit offering visitors a chance to learn more about Erie Sauder, founder of Sauder Village and the Sauder Woodworking family of companies.

“We’ve had this exhibit in the past, but now we’re bringing it into the museum building with new artifacts and new photos,” Krieger said.

The second gallery will offer an expansion of the “Grain, from Field to Flour” exhibit.

“It talks about the role agriculture plays in providing food, clothing, and shelter,” she said.

There will be a third exhibit, offering visitors a chance to step back into the Great Black Swamp.

The exhibit will showcase who lived in the swamp, how they lived, and how the swamp was altered over the years.

“You’re going to walk through an area that will have trees, sounds of the animals and (the sound of) mosquitos.

“You’ll feel like you’re walking into a swamp many, many years ago,” Krieger said.

Also coming is an exhibit of community history as part of the Archbold Sesquicentennial celebration.

“We’ve had lots of support from donors and local businesses to make this event possible,” she said.

“We had an event called ‘Dairy Days.’ This year, we have expanded the agricultural topics. Now, we’re calling it ‘Agricultural Adventures.’

“Every day of the week we will focus on a different agricultural topic: poultry, pork, beef, dairy, grain.”

“We will welcome hundreds of Massey-Ferguson (tractor and farm implement) owners from across the country. They’re going to be in the field, as more than 100 acres of ground will be planted with winter wheat,” she said.

Next year, the Massey- Fergusons will be back to harvest the crop.

At the Grime Homestead will be a new garage; and, later in the summer, a period correct truck will be in the garage.

“We will continue to tell the 1920s story” at the homestead,

Last fall, an expansion of the Sauder Village campground opened.

“That’s something we’ve really been pushing, and there has been lots of interest,” she said.

“We’ll be doing some special events at the campground for the campers who come and stay.”

“We keep looking for new and interesting ways to tell the story, to get our guests involved in history,” Krieger said.

“We’ll do more farming demonstrations every day, to bring history to life.