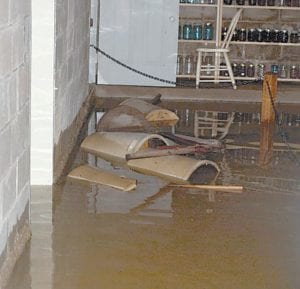 Water stands in the basement of the Grime Family Homestead house during the June 26-28 storm. The sump pump in the house couldn’t keep up with the incoming water. One of the large containers, like those in this photo, fell over and shattered. Floodwaters also made their way into the Sauder Village museum building, which is still recovering.– photo courtesy Sauder Village

The June 26-28 storm that dumped six to eight inches of rain on Northwest Ohio caused a lot of problems for a lot of people.

One place where the impact was felt, and still is today, is the museum building at Sauder Village.

Water up to three inches deep covered the floor of the building, threatening some artifacts and damaging others.

Tracie Evans, curator of collections, said the creek that runs through the village overflowed its banks and began encroaching into the museum building about 1 pm, Saturday, June 27.

The water had receded by about 1 am, leaving puddles in the building. Mops, buckets, squeegees, and other tools were used to remove the standing water.

The carpet in the Threads of Tradition quilt shop was also soaked. It had to be removed.

Evans said luckily, village workers saw the water rising and were able to move some of the textile and paper artifacts out of harm’s way. 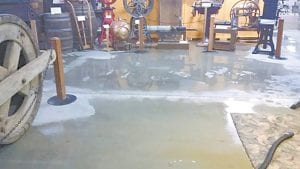 More photos of Sauder Village, showing problems caused by the storm that struck June 26-28. Above: Puddles of water standing in the museum building. At one point, water in the building was three inches deep. Not only did village workers and volunteers have to clean out the water, they had to reduce the humidity in the building, then repair and clean the artifacts. Left: Flooding in the village, Saturday, June 27.– photos courtesy Sauder Village

Metal objects exposed to the water, such as farm equipment, really didn’t suffer, other than rust.

The key was to dry the metal pieces, then watch for rust to minimize damage.

Some items were already coated in rust, which is fine.

“We don’t remove rust. It’s stable, it’s not continuing to rust,” she said.

Wood, however, is different.

Water leaches into wood legs and other parts, and can’t be dried quickly.

Wooded items need to be dried slowly, so as not to “shock” the wood, she said.

Some veneer pieces separated from their wood bases and were reapplied.

In old furniture, decorative trim was applied with a water-based glue. Water and humidity re-liquefy the glue, and the trim falls off, Evans said. 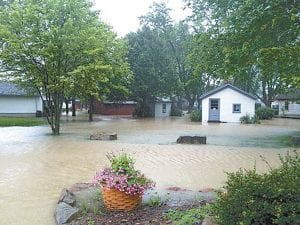 It was easy to reattach the pieces.

Some objects were turned over and laid on their sides to facilitate drying.

Evans said at one point, humidity in the building was near 80%.

Fans and dehumidifiers did the job.

Floodwater, she said, isn’t just water. It contains dirt and other contaminants.

Objects were cleaned with a very light, ph-balanced soap. Each was washed with a rag and soapy water, then rinsed to assure no soap residue remained.

What helped the cleanup effort was the weather. After the storms, warm temperatures and low humidity levels prevailed.

“We were very lucky not to have mold,” she said.

The Grime Family Homestead house had almost two feet of water in the basement. The sump pump couldn’t keep up, she said.

The tin shop, glassblower shop, and festival barn had water.

The ice cream parlor had water in the crawl space and only supplies were replaced.

The collection storage building, where many items not on display are stored, is located on a slight rise and was spared, Evans said.

While the flood presented a challenge, it also presented an opportunity.

The quilt shop had a new manager, who started her job at the same time the flood hit.

Since everything was removed from the shop, it was redone to fit the concept of the new manager.

Nine separate spaces, or galleries, will make it easier for visitors to take it all in, she said.

The recovery from the June rainstorm has been slow.

The museum building didn’t reopen until August, and only part of the space was opened.

Evans does not anticipate the museum building completely reopening until 2016. There still is cleaning of artifacts going on.