Sauder Village Addition Provides Link To The Past

by Pam Graber Special to the Buckeye 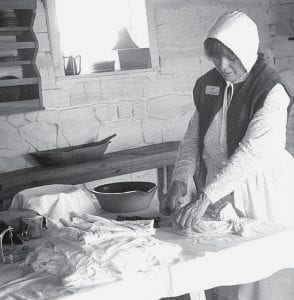 "I think what people who come out here want is a way to connect," said Ann Lux, Sauder Village curator.

"What that means to us is that even if you’re not a Stuckey or an Eicher or a Roth, your ancestor’s story was much the same as those we tell here."

Visitors to Sauder Village have a new way to connect with the past in the new Pioneer Settlement, which has its grand opening celebration Saturday, Aug. 22.

The settlement, which covers almost five acres, opens at 10 am. Bob Ford, a singer and storyteller, will perform throughout the day.

Visitors to the new addition enter through the Natives and Newcomers exhibit.

"We did this intentionally so that people could see the timeline progression," said Jeanette Smith, Sauder Village director of sales and marketing.

"It just makes it a little easier to put things in perspective this way."

"We have three buildings that are not completed," Smith said.

"The bank barn, the buggy shed and the buggy workshop still need a bit of work and will be completed as funding comes through."

Buildings in the Pioneer Settlement include a representation of the first Lauber Hill settlement, a log schoolhouse, the Witmer-Roth Home, Eicher Cabin, Peter Stuckey Farm, and Holdeman Church.

One of the first exhibits visitors encounter is a covered wagon loaded with items the pioneers would have had upon arriving in northwest Ohio.

"These wagons are narrower than the wagons the pioneers used to go west," said Sheri Lloyd, a costumed interpreter.

"That’s because these wagons are actually farm wagons. Their narrow wheelbed pulled easier through the swamp.

"When the pioneers arrived here, they were then able to remove the canvas from the top of their wagons and use them for farming. Our guests will be able to see for themselves that the early pioneers couldn’t bring much."

The covered wagon sits on a representation of the "Corduroy Road." Early roads through the Black Swamp consisted of logs laid side-by-side.

"The ground here was very swampy, so the roads were made of the most readily-available material, which were trees," Lloyd said.

"In this area, if you bought an 80-acre farm, about 40 of it was woods," said Arlan Beck, the Village’s historic farmer.

"You would cultivate about half of the 40 to make about 20 tillable acres."

Village artisans contributed many items to the new settlement.

Mark Nafziger, village potter, made the salt-fire glazed pottery used in the Eicher and Witmer-Roth houses.

"He researched the pottery used in this area during that time period and made everything so that we would be able to actually use it," Smith said.

"Everything from the size of the item to the type of clay used to the glaze is authentic to the time period."

"We’re especially pleased with the rug in the Witmer- Roth house," Lux said.

"All the village weavers worked on it at one time or another. The rug was made in six sections and each weaver had to work to exactly the same pattern so that all of the stripes would match up.

"Our weavers also taught themselves to make the linen toweling we have throughout the settlement."

Hands-on activities are a hallmark of Sauder Village, and the Pioneer Settlement carries on the standard.

Starting in the Lauber Hill representation, children can help mud the gaps between the logs in the shelter, carry water with a neck yoke, and pull a harrow to help prepare the garden.

In gathering information for the Pioneer Settlement project, Lux said, "We gathered stories through many letters, family Bibles, and census records."

"We’ve tried to tell the personal stories of the early pioneers of this area."