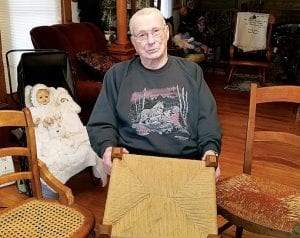 David Sauder, Pettisville, with some of the chairs he’s woven seats for using rattan, a natural fiber imported from Vietnam. Chair caning is a skill that has been passed down in Sauder’s family from his mother to him, and then to his son.– photo by Pam Graber

Shortly before David Sauder was married in 1959, he was at work building silos when he fell.

He was left with broken arms, leaving him unable to do that job.

But his injuries didn’t prevent his mother, Huldah, from teaching him how to cane chairs.

“My mother was a chair caner of some reputation in the community, and she had some chairs that had piled up in her basement,” Sauder said.

“She wasn’t getting them done and she said, ‘While you’re sitting there with your arms broken, you could be doing that.’”

“I just had one arm broken, really. I could work with the other one.”

Sauder is carrying on a tradition that was passed from mother to daughter for generations.

Since his mother didn’t have a daughter who could learn to cane chairs, she taught David, her oldest son. He has, in turn, taught his own son, Kent.

Sauder estimates that he has caned over 200 chairs.

Chair caning is the art of weaving seats and other parts of a chair from natural or synthetic materials. It dates back to the mid- 1600s.

“The most common reason (people need to have a chair caned) is because they stand on them to change a light bulb with high-heeled shoes on, and they poke a hole in them,” he said.

“Pretty soon, the hole is bigger than they want to sit on.”

It takes about 15 hours to cane an ordinary chair.

“Most generally, the holes around the seat dictate what pattern to use,” he said.

“If you’ve got a more round (center) holed chair that has more holes (around the perimeter) in it, the holes are smaller, so you use smaller cane and the weave is tighter.”

Sauder uses rattan cane in the seats that he weaves.

“The best cane comes from Vietnam,” he said.

“For a long time it was hard to get, because the natives weren’t going to go back into the boondocks to get the best of it. We were getting a lot of broken-up stuff, and stuff that had worm holes in it.

“That was, of course, during the Vietnam War.”

“I order mine from a guy in Connecticut, but I’m sure you can find it” other places, he said.

Cane is shipped in “bunches.” Each bunch covers about 4 1/2 chairs.

Most cane-bottom chairs have between 65 and 70 holes around the seat.

“When I first started, I charged 10 cents a hole, and I still had people complain that I was overcharging,” he said.

In the Archbold area, Sauder believes he may also be one of the only ones who canes chairs.

“My son can do it, too. There used to be a number of women who could also do it, but most are gone now.”

Sauder can do three basic types of seats: the standard, open weave; a tight, solid weave; and prefab seats, where the cane comes prewoven and is simply cut to size and fastened.

His least favorite type of seat is the solid weave.

“Those are finger cheweruppers. ‘Til you get one of those done, you’ve got your fingers pretty well hurting,” he said.

“You want to get them full and nice, but you have to about force them to get them to go. You have to use a special tool to move the cane. It looks like a spade.

“Then you’ve got to keep everything wet so that it moves. Put soap on it and keep it wet– then you can slide it.”

Sauder works with wet cane no matter what kind of seat he’s doing.

“When it dries up, it shrinks and it makes the seat solid. Otherwise the seat would sag in the middle,” he said.

“Some will do that from sitting on them, but it doesn’t happen very often if you had a decent person doing it so that you’ve got good support behind it.”

Using plastic cane instead of rattan is another option, but Sauder doesn’t recommend it.

“It’s longer life than the regular cane,” he said.

“The only problem is, if you want to cane a chair that you want to keep and make it be an antique, then don’t put plastic cane in it. It’s going to reduce the value of it by half.

“Anymore, that’s basically why you get a chair caned, because of the authenticity of it.

“They’re too expensive to cane for any other reason.”