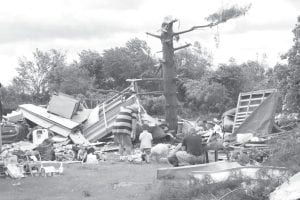 Above: Residents pick through what’s left of a house after a tornado tore through an area south of Delta, Saturday night, June 5. The home was located along Co. Rd. C, east of Co. Rd. 3. Right: Tornado winds estimated at speeds between 111-135 mph tore aluminum siding off barns and wrapped it around sign posts throughout the affected area.– photos by Mary Huber

Volunteers are continuing cleanup efforts in portions of York and Swancreek townships in Fulton County after a tornado roared through the area late Saturday night, June 5.

One victim was hospitalized, but released Monday.

Of those, about half sustained minor damage, while the other half suffered major damage.

Fulton County tornado sirens, including those in the Archbold area, began to wail about 9:59 pm, Saturday night, after the National Weather Service North Webster, Ind., office issued the first tornado warning for the county. 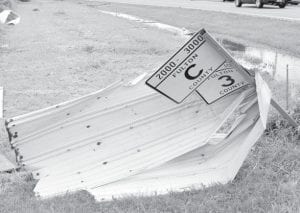 Sunday, teams of NWS investigators visited the county and surveyed the damage. Based on their findings, the weather service announced Sunday afternoon Fulton County had been struck by a tornado that ranked as an EF2 on the Enhanced Fujita scale.

The Enhanced Fujita scale starts with an EF0, with winds of 65 to 85 miles per hour. The top of the scale is an EF5, with winds in excess of 200 mph.

The NWS investigators stated the tornado “began along Highway 109 just east of Co. Rd. A and continued 7.5 miles, weakening as it passed into Lucas County.”

Justin Thompson, Fulton County Emergency Management Agency director, said a majority of the damage was confined to an area bounded by Co. Rd. 7 on the west, Co. Rd. C on the north, Co. Rd. 4 on the east, and Co. Rd. A on the south.

Short, who visited the area Sunday, described the cleanup as “neighbors helping neighbors.”

The Shiloh Christian Union Church, located on Co. Rd. 5 north of Co. Rd. B, was named the reception center for volunteers. Volunteers are asked to check in there before starting work.

Those with questions about tornado-related issues, including how to donate to tornado victims, are asked to call First Call For Help at 2-1-1, or by dialing 1-800-468-4357.

Brett Kolb, Fulton County auditor, announced those who had homes or other property damaged or destroyed could be in line for a reduction in property taxes. Those affected are urged to contact Kolb’s office.

The deadline to apply for a property tax reduction as a result of storm damage is July 30. Property taxes can be reduced by as much as 75%.

“We have an excellent base of volunteers.”

Volunteers are being asked to check in at the Shiloh Church beginning at 9 am.

There is a need for volunteers with chain saws. Those bringing their own are asked to check the guidelines for preparing tree waste for removal at the church.

Tornados hit other counties in Ohio, Indiana, and Michigan over the weekend. Press reports say seven people were killed by tornados in Ohio alone.