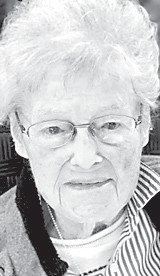 Sarabelle was born on Sept. 10, 2018, in Butler, Ohio, to Alpheus and Lucretia Aungst, but moved to Archbold when she was three years old.

She grew up there, graduate from Archbold High School, then worked as a bookkeeper for her father in the Aungst Brothers Mill.

In 1939, she married Clare Bacon, also from Archbold. Together they followed his work with Owens-Corning Fiberglass, first in Newark, then in Darien Conn., and on to Sylvania.

During that time, she was also able to join her husband on trips to England, Belgium, Russia, and Japan. She also began her long association with her favorite organization, PEO.

Sarabelle lived for a while in Cary, N.C., before moving to Cambridge. She made friends wherever she was, and every single person who knew her said that she was the nicest person that they had ever met.

She is survived by her three children, Michael Bacon Sr. (Beverly) of Kentwood, Mich., David Bacon (Bonnie) of Colorado Springs Colo., and Joann Sexton (Dan) of Cambridge; her nephew, Edward Allen of Toledo; seven grandchildren; 22 great-grandchildren; many other nieces, nephews, greatnieces, great-nephews, and cousins; many, many friends; and her cat, Chessie.

Burial was at the Toledo Memorial Park Cemetery, Toledo.

As an expression of sympathy, the family asks that memorial contributions be made to Hospice of Guernsey, Inc., PO Box 1165, Cambridge, OH 43725.

Personal condolences may be sent to the family at www.thorn-blackfuneralhomes.com.