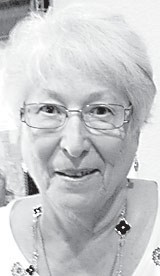 Sandra Grime died at home surrounded by her family in McKinney, Texas, on May 30, 2016, after a short, but courageous, battle with lung cancer.

She was born to Charles and Elnora (Moser) Hall in Beaverdam in her parents’ home on Sept. 29, 1939.

Her family moved to West Unity when she was four years old and later to Archbold, where she graduated in 1957.

She attended beauty school, worked at LaChoy, and later spent 23 years working in the Pettisville school system and an additional eight years in the Grapevine and Keller, Texas, school systems.

Sandra married Gerald “Jerry” Grime in 1959. They were married 37 years until Jerry passed away in 1995 after a long battle with Multiple Sclerosis.

The family all currently re- sides in the Dallas/Ft. Worth metroplex, where Sandra has lived since 1996.

Sandra loved her family and always looked forward to her girls weekends with her daughters. She loved to cook and did so for her family and friends very often. She was famous for her potato salad.

Sandra loved the Lord and was a member of St. Peter Catholic Church in Archbold, and St. Elizabeth Ann Seton in Keller, Texas. She served some time as president of the Rosary Alter Society and taught CCD classes at St Peter.

Short Funeral Home in Archbold was entrusted with the arrangements. www.ShortFuneralHome.com.