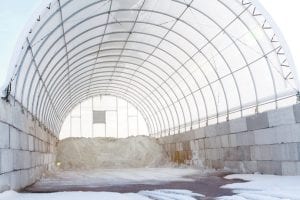 In spite of appearing nearly empty, Jason Martz, Archbold superintendent of streets, said he’s confident the village has enough ice-melting road salt to last the remainder of the winter. This salt storage structure, approved by village council in the fall of 2014, can hold up to 1,000 tons of salt. The fabric-covered storage structure cost around $22,000. The village also has a second, older salt storage building. Martz said the village still has about 350 tons of salt on hand.– photo by Mary Huber

Jason Martz, Archbold superintendent of streets, said yesterday, Tuesday, the village will be fine when it comes to road salt for the remainder of the winter.

“We’re still in pretty good shape. I’m not nervous yet,” he said.

Martz estimated the street department workers have used 500 tons of salt to battle icy roads so far this winter. There are another roughly 350 tons left, he said.

Ice that formed overnight Saturday and Sunday, Feb. 10-11, left a thick coating on village streets. It took a heavier application of salt to start the melting process, he said.

Once temperatures warmed, the salt began to work. Vehicles driving over the salted streets broke up the ice and assisted the process.

The village will refill its stockpile of road salt in the spring, he said.