by Pam Graber
Special To The Buckeye

Ryeana Klopfenstein, at left, in the elegant black and white dress that she wore to the 2019 PHS prom. At right, her mother– then Stephanie Nafziger– in the same dress at the 1994 PHS prom. Stephanie’s prom date that year was Tim Klopfenstein. The couple later married.– courtesy photos

For most girls, finding a prom dress means a trip to the mall, then dropping hundreds of dollars on “The Dress.”

For Pettisville’s Ryeana Klopfenstein, it meant both a trip to her mom’s closet, and a step back in time.

“I knew I was going to wear the dress,” Ryeana said.

“I borrowed a (different) dress last year for prom. I didn’t really know at that point if I wanted to wear (the black dress).

“As this year started, I knew I wanted to wear it.”

“We even went with the same flower choice,” Ryeana said. “I had stephanotis in my corsage and so did she.

“I found a corsage on Pinterest that I liked, and when we went into Weeping Willow (Florist) to have it made, Mom said, ‘Oh, I think I had those in my wedding bouquet.’

“Turns out they were also in her prom corsage. It was pretty cool.” 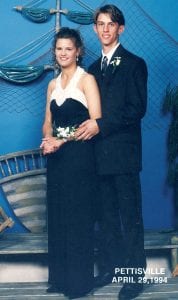 Purchased at the former Lion’s Store, the black Aline dress is accented with a white halter top with beading detail on the white.

“Just the back clasp needed to be fixed,” Stephanie said. “That elastic band had worn out– had dry rotted. Just two hooks added– that’s really all the altering.

“A couple beads needed to be fixed.”

“Honestly, the seamstress didn’t do anything else to it. It was crazy.”

Stephanie kept the dress “because I just loved it. It was a simple black, classy dress. I knew black doesn’t go out of style.

“It was just nice and simple, and I thought maybe I would wear it again for a special occasion.”

But an occasion that special never came up.

“I just liked the dress, I guess,” Stephanie said.

“I suppose if Tim (her husband; both were members of the PHS Class of 1995) and I would have broken up, I probably wouldn’t have kept it.

“Ryeana saved me money, for sure,” Stephanie said. “We’ll see if her sister (Hollyn) wants to wear it, but probably not.”

“I just had a picture of it, and when I showed it to them they thought it was super, super pretty.

“When I told them it was my mom’s dress, they were like, ‘No way.’ They were shocked that it was from the ‘90s. They loved it.”

“Even Tim thought that it was cool that she could wear it,” Stephanie said.

“My mom thought it was neat that her granddaughter could wear the dress she helped me choose.

“They thought she looked nice and beautiful. It was special.”

“She wanted me to wear it last year, but I didn’t want to if I wasn’t a junior,” Ryeana said.

“And, obviously, I wore it with her dad. That kind of made it more special,” Stephanie said, adding, “Not many girls can say that– that her parents are still together, and I wore it to my junior prom, too.”