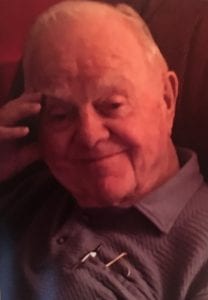 Russell Gene Wheeler, age 89, of Archbold, passed away Monday, July 3, 2017, at Fairlawn Haven Nursing Home in Archbold.
Prior to his retirement he had been a district engineer for Toledo Edison, where he had worked for 43 years, having retired in 1990.
Russell was born in Wharton, Ohio on May 3, 1928, the son of Roy and Hazel Bell (Shuck) Wheeler.
He married Lucille Jane Leupp on Aug. 9, 1947, and she preceded him in death in 2001.
He was a former member of the Defiance Elks Lodge BPOE.
Surviving is his daughter, Kay (Glenn) Badenhop of Archbold; grandchildren, Matt (Stefanie) Badenhop, Trisha (Joe) Schneider, Gina Glandorff and Jodi (Darr) Shively; and 10 great-grandchildren, Nolan and Marcus Miller, Lindsey Cheney, Autumn Shively, Mykale, Maddox, Alexa and Violet Schneider, and Gabe and Avery Badenhop.
He is also survived by his brother, Marvin (LuAnn) Wheeler of Wauseon, and nephew, Chris (Stephanie) Wheeler.
He was preceded in death by his wife, parents, and daughter, Linda A. Gigax.
Graveside funeral services will be held at 10 a.m., Friday, July 7, 2017, at the Wauseon Union Cemetery, with Pastor Paul Reichert, officiating.
The family requests that memorial contributions be given to St. Martin’s Lutheran Church in Archbold.
Online condolences may be offered to the family at www.grisierfh.com. Grisier Funeral Home in Archbold has been entrusted with arrangements.-Posted 7.6, 11:58 am