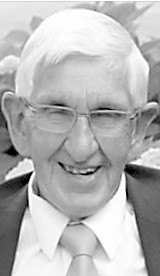 Prior to his retirement, he had been a truck driver.

Russell was an Army veteran of the Korean War and was a member of the Wauseon American Legion Post and the Wauseon VFW Post.

Russell was a member of Emmaus Lutheran Church.

He is also survived by two sisters, Lois Tester of Wauseon and Shirley Baldwin of Lyons.

His most recent greatgranddaughter, Willow Opal Wyse, was born the same day that he died.

He was preceded in death by both parents; one son, Kevin O’Brien; four sisters, Wanda, Janet, Nina and Nancy; and two brothers, Kenneth and Marvin.

Visitation for Russell will be held from 9 a.m. until 11 a.m. on Tuesday, Feb. 18, 2020, at the Edgar-Grisier Funeral Home in Wauseon. A Celebration of Life will immediately follow, also at the funeral home, with Pastor Brad Faler officiating.

Following the service, military rites will be accorded by the Fulton County Honor Guard. A meal will follow at the VFW Hall in Wauseon.

The family requests that memorial contributions be given to CHP-Defiance Area Inpatient Hospice, or the charity of the donor’s choice.