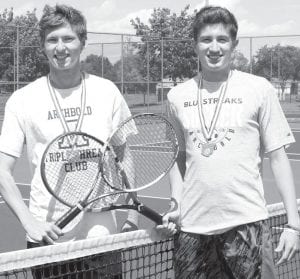 Luke McQuade, left, and Jereme Rupp are the first boys doubles players in AHS history to advance to the state tournament.– photo by Mary Huber

The doubles team of Jereme Rupp and Luke McQuade are the first AHS boys tennis doubles players ever to advance to the Division II state tournament.

Rupp, a senior, and Mc- Quade a junior, finished second at the district meet at Bowling Green State University, Thursday, May 18, and Saturday, May 20, the highest finish ever for an AHS boys doubles team or singles player at district.

The top three individuals and top three doubles teams advance from districts to the state tournament, Friday and Saturday, May 26-27, at the Lindner Family Tennis Center in Mason, north of Cincinnati.

Only two boys tennis players in AHS history advanced to the state tournament before.

Jesse Sensenig finished third at the district tournament in 1997 and played in the state tournament.

Andy Redd finished third at district to advance to the state tournament in 2006.

In 2012, Kevin Fredrick and Nick Cassidy finished fourth at district, just missing out on a trip to state.

Rupp advanced to the district tourney as a singles player in 2016, while Mc- Quade and doubles partner Alex Short also qualified for district. They all fell in the first round at BGSU.

Rupp and McQuade opened the district tournament with a 6-4, 6-4 win over the Oak Harbor team of Bo Hermes and Holden Pelz in the first round.

They defeated the Lexington team of Mike Sazdanoff and Benton Drake 6-2, 7-6 (5) in the second round.

In the semifinals, Rupp and McQuade defeated the Norwalk team of Andrew Herner and Jacob Coe 2-6, 7-5, 7-5.

In the match for first place, Rupp and McQuade were defeated by the Lima Shawnee team of Michael Rutter and Isaac Hanover 6-0, 6-1.

“It’s an incredible run we’ve had,” said Rupp. “We never gave up in the tournament, because we were down mostly at districts and we came back and won, so I’d say that’s pretty good.

Rupp is looking forward to “the atmosphere of seeing all the good teams there and being with my partner as we’re gonna kick some butt!”

Rupp has played tennis since his freshman year, while McQuade only started playing last year.

“I’m super happy that I started” playing tennis, said McQuade, “because I love this sport a lot, and the people are great.

“I just want to thank my partner for encouraging me through everything, and we’ve made a great run throughout sectionals and districts.”

“It’s incredible” being the first boys doubles players to advance to state, said Rupp, “because it leaves a legacy behind. Hopefully others can follow the same as us, as the underclassmen come up, and maybe they can make it to state.”

Rupp advises underclassmen to “at least give the sport a try. If you don’t like it, at least you gave it a shot, which is the most important thing.”

“It’s just a great feeling” to qualify for state, said Mc- Quade. “Obviously I’ll try to do it again next year with a different partner. I’ll obviously miss Jereme, but it’s just awesome. A great feeling.”

Rupp and McQuade play Circleville Logan Elm’s Avery Clouse, a freshman, and Jonathan Reisinger, a junior, in the opening round of the state tournament.

Play begins Friday at 9 am.