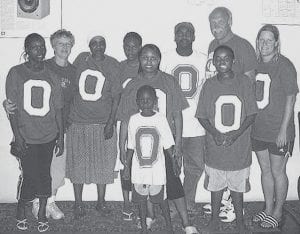 Becca Rupp, right, now has a combination of two families. After Becca moved to South Africa in August 2005 for a two-year term as a Peace Corps volunteer, her parents, Tony and Carla Rupp, Archbold, second from left and second from right, respectively, spent two nights visiting Becca and her host family in April 2006. “It was good for them to see where I was,” said Becca. The Rupps brought the Ohio State University shirts as gifts.- photo courtesy Becca Rupp

There are several things a common observer wouldn’t guess about Becca Rupp.

Like the fact that she ate chicken feet or speaks a native African language.

That for two years, she lived without running water in what she calls a “very rural” village with the exotic name ‘Mokuruanyane.’

That she actually met people who have never used computers.

Or that these experiences took place while she lived in South Africa as a volunteer in the Peace Corps, a program John F. Kennedy started in 1961 to promote understanding between Americans and other nations.

Becca, a former seventhgrade math and science teacher in Houston, Texas, always wanted to live overseas. “I fi- nally just decided to stop thinking about it and do it,” said the 1995 Archbold High School graduate.

Soon the date was Aug. 15, 2005, and Becca was flying to a Peace Corps placement in South Africa with a “brief but wide open” job description and little idea what she was getting into. 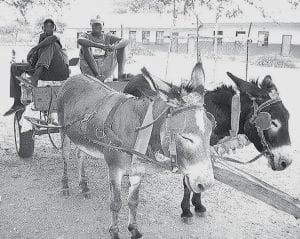 Becca Rupp found unique ways to aid the rural South African village she lived in for two years as a Peace Corps volunteer. Take the donkey cart race fund-raiser she organized. High school boys like the two shown here registered carts, elementary kids bought tickets, and prizes awarded “fastest” and “best decorated” carts. “I was quite pleased with the outcome,” said Becca. “It was a good way to get the community involved.”- photo courtesy Becca Rupp

After just two months of training with 88 other Peace Corps volunteers placed in South Africa, Becca was in charge of aiding 50 teachers in three elementary schools.

“When I first got there, I was just really overwhelmed,” she said. Everything was completely foreign.

While her host family and most people spoke English, they also spoke one of South Africa’s 11 official languages called Sepedi.

“A lot of my time, I didn’t know what they were saying,” Becca said. “It’s nothing like any language that I’ve ever learned before.” She’d earned a Spanish minor along with her bachelor’s in elementary education from Taylor University, Upland, Ind.

Becca also had to slow her American-paced lifestyle. “Even while walking to school with my host mom, she always said that I walked fast,” said Becca.

The people felt a different sense of time, Becca said. As an American, “you have to be very flexible, patient, and know if you get this one little thing done, that’s a great accomplishment.”

Sheer differences in appearance didn’t help. There was the shock of hearing passersby call her “fat,” a compliment for someone in a country where food can be difficult to find, but a faux pas for someone from the United States.

The people also assumed that a white American like Becca could solve all their financial problems- out of her own pocket.

“They would say things like, ‘You’re going to help us overcome poverty,'” she said. “So I would have these huge burdens on me- their expectations versus mine.”

However, the aid Becca really could offer wasn’t monetary, but another form.

Another Form of Aid

Becca rotated through the three schools under her care in weeklong blocks of time. It was her job to help teachers help students.

“It’s tough what they expect some of these teachers to do,” said Becca. Because of South Africa’s soaring unemployment, most teachers lived away from their families during school, going wherever necessary to find a job.

Add in class sizes of around 50 students per teacher and a nationally-mandated curriculum that just came out in 2004, and the struggles of teaching in South Africa are better understood.

“The new curriculum is quite westernized, so it’s a big change from what they’re used to,” said Becca of her teachers.

It meant some of Becca’s work was simply explaining English terms.

She also offered workshops on topics like managing students in the classroom and using books, since, Becca said, having books and reading “is also quite foreign” to South Africans.

Becca helped organize a library with a computer database after books and computers were donated to the schools.

However, not all Becca’s time was spent with staff. Teaching after-school English classes to high schoolers and helping students and staff use the new computers involved close ties with kids.

“Most teachers and students had never even touched a computer before,” said Becca. “It’s neat to see them getting excited about it. They loved it.”

The kids picked up computer skills quickly, much to the surprise of the teachers, said Becca.

“Teachers are like, ‘I can’t believe they know how to use the mouse and I don’t!'” she said.

Becca said the Peace Corps experience was “challenging, but good.”

“Some days, it felt like it was very long and would never end,” she said. “But I think once I got into it, the days would start to go faster and I’d feel like, ‘I’m getting my niche here. I have this good thing going.'”

Becca said she would “defi- nitely” repeat the experience. After all, there was so much to enjoy.

South Africa was comfortable, with access to most of the modern-day conveniences we have in the States. Electric- ity was typical, everyone had a cell phone, and Becca could buy anything she needed in a nearby town.

Plus, she got to travel Africa with two other close-by Peace Corps volunteers. One was Alicia Bowers, a 2001 Pettisville High School graduate, whose job assignment also dealt with education.

Although Becca and Alicia were from nearby hometowns in the United States, they never met before joining Peace Corps.

In South Africa, “we got to know each other really well,” said Becca. They met in town weekly for groceries and lunch.

Becca also enjoyed becoming part of her village, which she said was easy since the people were so welcoming.

In South Africa, “everyone is always welcome into your house,” said Becca. “You can live there and stay there for as long as you want.

“My family was really great and very supportive.”

Becca met her future host family during training, when the mother asked Becca what foods she liked.

“I thought it was so endearing of my host mother,” said Becca. “She was wanting to prepare and get ready for me.”

So Becca told her about a porridge she’d eaten while staying with another family during training.

“The first morning for breakfast, she had made this,” said Becca of her host mom.

But her host mom had a- um- different style. “It was sour porridge,” said Becca.

While Becca had to choke it down, she appreciated her host mom’s gesture.

Becca lived with her host mother and three children, including a cousin, in a fairly upscale brick home.

“If you’re employed, you’re fairly wealthy,” said Becca. Her mother was a teacher and her father had been a nurse before he died, so her family could afford a nice home and a few cars when most people relied on public transportation.

Living with a family helped her experience the colorful culture.

Women really do carry things on their heads, said Becca. Once, she saw a woman carrying pop in that manner.

“I thought, ‘Wouldn’t it be easier to just carry it?’

“But I guess not,” she said. “It’s really easy for them and natural.”

Another thing natural for South Africans: dance. “Their moves are amazing to me,” said Becca.

Becca returned July 11 to flush toilets, running water, and a distinct absence of chicken feet on the dinner table.

However, two years in this foreign context has changed her perspective.

“I thought I was a patient person before leaving, but it’s just brought a new meaning of the word to me,” said Becca. “Patience. Just taking one day at a time. Appreciating the things that we have. Not worrying. Lots of things like that.”

“It will be a learning year definitely, but I am looking forward to it,” she said.