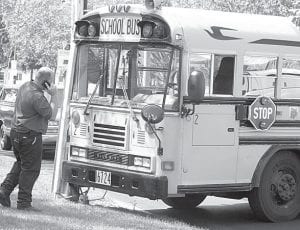 An Archbold school bus is stopped by a pole along Stryker Street, after it rolled out of the alley on the east side of Archbold Middle School, Thursday afternoon, Aug. 30. The vehicle was left unattended.– photo by David Pugh

Joe Long, Archbold Area School District interim superintendent, said he will decide this week whether to discipline the driver of the school bus that rolled down an alley and struck a pole.

Albert Babcock, the bus driver, stopped the bus in the pickup zone at the Archbold Middle School, which is in an alley east of the school building.

The Archbold police report on the incident stated the parking brake was not set.

The driverless bus rolled south in the alley, then crossed Stryker Street, turning slightly to the left, or east.

When it got to the south side of the street, it struck a utility pole with its right front corner.

The outside mirrors on the passenger side were damaged, as was some of the glass in the folding door.

Long said the damage to the vehicle, a 2004 model transit-style bus, was minor. The front bumper received a scuff in the paint.

Transit-style buses can seat as many as 84 persons. The driver sits in front of the front axle.

The vehicle was taken out of service for repair.

He said he has asked Beth Wanemacher, district transportation director, to prepare a report.

Long said Babcock was questioned about the incident, and was allowed to drive Friday morning.

“We’ve all made mistakes,” Long said.

“It’s an unfortunate situation, but the great thing is no one was hurt.

“We were very fortunate there were no pedestrians, and the drivers of other vehicles saw it.

“We take safety seriously. Parents and grandparents want to know their children are safe when they go to school.”–David Pugh