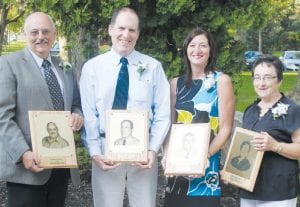 Three men and a woman have been named to the Fulton County Agricultural Hall of Fame for 2012.

They were honored at a ceremony in Ruihley Park Pavilion Monday, Aug. 27.

Rufenacht is an active partner in Rufenacht Farms and Enterprises and the Pettisville Grain Company.

He and his brother, Jim, have farmed together for nearly 35 years. He helps manage the grain crop, forage, and steer operations with Jim, their sons, and a nephew.

Rufenacht has provided educational tours and talks to area agriculture students, works with the Ohio State University Extension and the Fulton County Soil and Water Conservation District on several projects, and has helped young people become involved in agriculture.

He also is involved in many charitable and community programs for agriculture, education, and his church.

He was a member of the founding committee of the Foods Resource Bank project, and remains involved with FRB today.

Foods Resource Bank has guided the community in providing more than $190,000 in eight years for use in such projects as water for remote villages in Kenya, Africa. Annually, the Rufenacht families make donations of time and money to FRB.

Rufenacht also is a cofounder of Walt’s House, a home for single men in need of supervision.

He has served on the Farm Credit Services board, Farm Service Agency board, Fulton County Farm Bureau, and several commodity groups.

At Lockport Mennonite Church, Rufenacht has been an elder, youth sponsor, youth advocate, and teacher. He is a recipient of the Mennonite Mutual Journey Award.

Gaynor is the executive director of the Fulton-Lucas West Counties of the Farm Service Agency.

He has served Fulton County for 32 years, and has been a leader to the community.

He grew up on a beefcow operation in Ashtabula County.

He began working for the United States Department of Agriculture in 1978, starting as a county officer-training intern. He became the County Executive Director of Fulton-Lucas West Counties in 1980.

From 1981 to 1997, he served as the key county CED for aerial observation, when each county was responsible for its own records. For his work, he received the Distinguished Service To Agriculture award.

In 1980, Gaynor was recognized for his outstanding contributions to the midwest area office. In 2000, he and his staff were awarded the Fulton County Soil and Water Booster of the Year title.

Through his leadership, Fulton County received the 1,000-Acre Achievement Award for the Ohio Lake Erie Conservation Reserve Enhancement Program in 2005.

Many of his ideas have led to enhancements to the national software program for the betterment of services to the nation’s agricultural producers. He also has submitted several cost- and time-saving ideas, which have been implemented to better serve producers.

Gaynor works with academic excellence programs with Pike-Delta-York Schools. He serves as a Destination Imagination appraiser.

He has served as a Boy Scout leader, and is a longtime blood donor.

He attends Zion United Methodist Church, and has served in leadership positions there.

Emmons has spent a lifetime promoting agriculture and teaching people of all ages the importance of production agriculture, particularly the dairy industry.

She and her husband, Neree, have been dairy farmers for more than 49 years.

She also has been involved with several dairy and agriculture organizations.

She has served for 26 years as a dairy communicator for the dairy co-op, which included traveling to Washington, D.C. to meet with government representatives about the importance of agriculture.

Emmons regularly helps to promote milk and dairy products and their importance in the diet, including hosting school groups on the family farm to learn about the dairy industry.

She also has been a member of the State Holstein Association, Fulton County Farm Bureau, Ohio Township Association, Toledo Rose Society, and the Association of Horticulture Professionals.

Emmons has served as a Sunday school and Bible school teacher, is a member of her church choir, and was a 4-H advisor for many years.

In addition, she has been a registered nurse at Fairlawn Haven Nursing Home for 26 years.

A resident of Amboy Township, he served as a supervisor of the Fulton County Soil and Water Conservation District from 2005 to 2010, and was a representative for Fulton SWCD as an advisor on the county Regional Planning Commission.

Holland’s hope was that the SWCD office would continue to educate the public on the importance of conservation of natural resources. He encouraged people to implement conservation practices in their daily lives.

His innovation in conservation, tillage and practices were an inspiration to many.