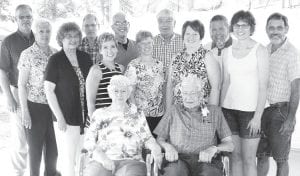 They have been married for 69 years.

Vernon was born in Williams County, but graduated from Pettisville High School in 1943.

Ruth was born in Wood County. Her family moved to Fayette when she was in the eighth grade, and she graduated from Fayette High School in 1945.

It was love at first sight for Ruth. She first saw Vernon with “some other guys” at Rice’s Restaurant in Fayette (now R&H Restaurant), where she worked while she was in high school, and she “picked him out of the bunch,” Ruth said.

Vernon farmed, and worked at the ladder factory and Sauder Woodworking before retiring for 10 years. He then worked for Kinetico in Wauseon for 10 years because he “got tired of sitting around,” he said.

He retired for the final time five years ago, when he was 84 years old.

Vernon said the secret to being married so long is “a little give and take.”