Roths Grow Fish, Plants Without Sun Or Soil In Pettisville 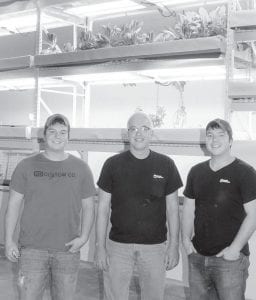 Rick Roth, center, with his sons Craig, left, and Tyler, stand in front of the multi-level rack that holds their aquaponics operation. Built in a commercial building in Pettisville, the bottom tank has fish; plants grow in the three racks above. By cultivating plants and raising fish indoors, they can control the growing environment, creating several advantages.– photo by David Pugh

In the middle of farmland, less than an hour’s drive from the Great Lakes, Rick Roth and his sons Tyler and Craig, all of Pettisville, are growing plants without soil or sun, and raising fish in a warehouse.

They have established an aquaponics operation under the name RD Custom Companies in an industrial building they own in Pettisville.

“Aquaponics” combines aquaculture, raising fish in a controlled environment, with hydroponics, the growing of crops without soil, in nutrient rich water.

The original idea came to Rick about three years ago, after seeing the concept on a morning television show.

He began researching the idea, and discovered it had been done for 25 to 30 years in other places.

He traveled to Milwaukee, Wis., where he toured a similar operation set up in an old warehouse.

“We decided to check it out a little more, and got confirmation we should do it,” Rick said. 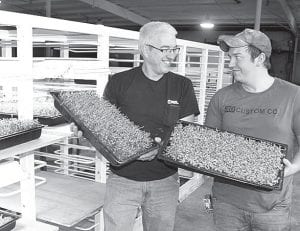 Rick Roth, left, and his son Craig, with trays of microgreens, one of the products their company, RD Custom Companies, grows indoors. Microgreens are tiny, edible plants produced from the seeds of vegetables, herbs or other plants. Despite their tiny size, they can have intense flavor.– photo by David Pugh

Tyler had a job in Indiana but knew his father was researching aquaponics, and had been for a couple of years.

“I wanted to come back and work with my dad and my brother.

“I had a job, but there’s something to be said for being your own boss.”

Craig said he did his own research on the Internet, and even in a bad economy, people are going to eat.

Now, Craig said, there is a culture, in which “people are concerned about where their food comes from, and how fresh it is. It makes sense to do something now.”

Under their system, there is a large rack with four levels.

On the bottom are tanks full of fish and prawns. They feed the fish, and the fish excrete their waste in the water.

The water is pumped to the top level of the rack, where it flows through plants growing in a special medium under electric light.

The plant roots hang down into the water, where they absorb the nutrients from the fish waste and clean the water.

The water flows through three levels of growing plants, before it is returned to the tanks, where the process starts over.

Prior to this latest enterprise, Rick ran a business manufacturing urethane foam, but that business was on its way out.

The Roths were able to use much of the equipment from the foam business in the aquaponics operation, so their investment was kept to a minimum.

Aquaponics has several advantages, as pointed out by the Roths:

•Because the plants grow indoors, they aren’t exposed to weeds or pests, so there’s no need for herbicides and pesticides.

•In the controlled environment in the building, plants don’t fall victim to frosts, hail damage, drought or flood.

•With special grow lights and the controlled environment, the “growing season” inside the building never ends, and the “sun” is up 24 hours a day.

“Everything is very consistent. Theoretically, our products are the same in January as they are in September,” Craig said.

In addition to plants rang- ing from strawberries and tomatoes to sweet basil and oregano, they also can sell the fish.

Rick said he was first drawn to yellow perch, because research has shown the yellow perch population in the Great Lakes is down 60% in 10 years as zebra mussels, an invasive species brought into the lakes in the ballast water from ships, have taken over.

In the Roths’ tanks, mussels and other creatures can be kept out.

Rick said they are looking to partner with schools, such as Northwest State Community College, to possibly allow interns to study aquaponics at the facility.

“Even Pettisville High School has a very small aquaponics system set up in FFA,” Tyler said.

They’ve also talked with the Center for Innovative Food Technology in Toledo about possibilities for grant funding.

So far, Rick said the business, which just began selling some of its products last Christmas, is not generating a lot of revenue, “but we’re getting close.”

They’re lining up accounts for their products, and since they use no pesticides or herbicides, they could qualify for organic licensing.

That means they could sell their produce at a premium price.

While the operation is about fish and food, it also has another element– faith.

Rick said he knew the urethane foam business was failing. He had been praying, “asking God, ‘What do you want me to do? Do you want us to do aquaponics? I want a sign, an answer.’

In Chapter 47, Ezekiel is shown a temple from which water flows.

Four sections of the resulting stream are measured off, and the water gets progressively deeper. In the last section, there are abundant fish, plants and trees.

Their building has four sections, or bays. The back bay is set up as a kind of community center with a basketball court and a stage where worship services are held.

That, he said, could be their temple.

And the water flowing though the four levels, three of plants and one of fish, could be the flowing water Ezekiel describes.

“We’re going on that faith, that that (aquaponics) is what He wants us to do,” Rick said.