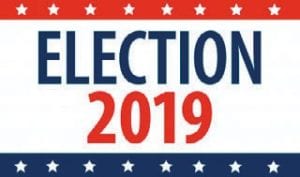 Keith Roth, Kevin Morton, and Rick Frey proved to be the winners in three close races in the Tuesday, Nov. 5 general election.

The three were apparent winners after the unofficial vote count the night of the election; or in the case of Roth and Joyce Kinsman, write-in candidates for German Township fiscal officer, the following day.

But each held relatively slim margins, and there were still enough provisional and absentee ballots outstanding to sway the final results.

The final official count of the votes from the election was held Wednesday, Nov. 20.

The members of the Fulton County Board of Elections met at the board office for the count, known as the “final canvas.”

If the margin of victory between candidates is one-half of one percent (.5%) or less, state election law calls for an automatic recount of the votes.

Melanie Gilders, director of the Board of Elections, said the Ohio Secretary of State office provides the formulas to determine the margin.

The closest of the three races was the race for a seat on Archbold Village Council. With three seats to be elected and five candidates, Kevin Morton, incumbent councilman, retained his seat by eight votes over challenger Monica Miller.

Gilders said board officials ran the calculations three times, and determined that for an automatic recount to be triggered, the margin of victory would have to be less than 7.93 votes.

In the race between Roth and Kinsman, board calculations indicated a recount would be triggered if the margin was less than 4.27 votes.

Rick Frey and Dave Murry ran for the unexpired Clinton Township Trustee term of the late Perry Rupp. Frey won by 31 votes. For a recount to occur, the margin of victory would have to be less than 12.

In the Archbold Village Council race, Karla Ball received the most votes. After the official count, she gained an additional 10 votes, bumping her total from 914 to 924.

Kevin Eicher, council incumbent, and Morton each picked up six additional votes in the final count, bumping Eicher from 688 to 694, and Morton from 679 to 685.

In the German Township fiscal officer race, Kinsman added one additional vote for a total of 421. Roth added two, for a 433 total.