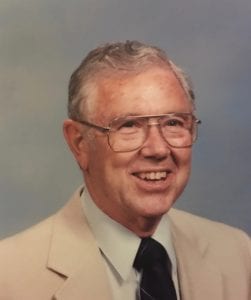 Ronald R. Robinson, age 91, of Stryker, passed away late Friday, Dec. 1, 2017, at Genesis of Bryan following an extended illness.
Prior to his retirement he had owned CR Home Furnishings in Archbold for many years and had also owned and operated R Home Interiors in Stryker.
Mr. Robinson was born on June 20, 1926, in Stryker, the son of the late Robert J. and the late Ethel (Cramer) Robinson.
On June 27, 1948, he married the former Jeanne Grisier, and she survives.
He was a member of the First Lutheran Church in Stryker, where he had served on many committees, taught Sunday school and sang in the choir.
He was a member of the Free and Accepted Masonic Lodge and the Shriners. He had also served on the Stryker School Board, the former Stryker Public Utilities Board, as well as the Advisory Board of the Farmers and Merchants State Bank, Stryker branch.
He enjoyed sports and was a diehard fan of the Detroit Lions, Detroit Tigers and the Ohio State Buckeyes.
Surviving besides his wife Jeanne are two daughters, Sandy (John) Kurivial of Stryker and Rhonda (Rod) Bruot of Bryan, and five grandchildren, David Kurivial of Cuyahoga Falls, Stephanie Kurivial of Cincinnati, Jennifer (Dusty) Potter of Indianapolis, Ind., Matthew (Rachel) Bruot of Columbus, and Amanda Bruot of Seattle, Wash. Also surviving are great-grandchildren Jaxon Potter and Ruth Bruot.
Preceding him in death besides his parents was his brother, John Robinson.
Funeral services will be held on Thursday, Dec. 7, 2017, at the First Lutheran Church in Stryker at 11 a.m. with the Rev. Tamara Wood officiating. Interment will be in the Stryker Cemetery.
Friends may visit with the family on Wednesday from 6-8 p.m. and on Thursday from 10 a.m. until service time at the First Lutheran Church in Stryker.
The family requests that memorial contributions be made to the First Lutheran Church; the Alzheimers Foundation of America, 322 Eighth Ave., New York, NY 10001; or the charity of the donor’s choice.
Online condolences may be made to the family at www.GrisierFH.com. The Grisier Funeral Home in Stryker has been entrusted with arrangements.-Posted 12.4, 3:25 pm