Rohrs Honored As 2012 Citizen Of The Year 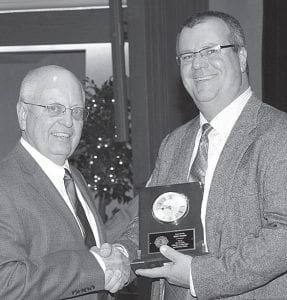 “Now I want you all to hear something,” said Cecily Rohrs, well-known local activist for the disadvantaged.

Speaking to the audience at the Thursday, Nov. 1 Archbold Area Chamber of Commerce annual meeting and Citizen of the Year banquet, she continued, “I know what you’re thinking.

The Jerry she referred to is her husband, Jerry Rohrs, 2012 Citizen of the Year.

Making fun of her own sometimes-forceful personality, she said, “Some of you are saying, ‘I don’t know if I could live with her, and for that alone, he ought to be Citizen of the Year.’

“But I don’t want you to have a pity party for Jerry.”

She said they have known each other since they started school at Liberty Center, “and if he wanted to jump ship, he could have done it 60 years ago.”

She described their personalities, saying while she was impatient he was a “patient, behind-the-scenes plotter” who quietly gets his own way.

She said in their years together, he had only raised his voice to her one or two times.

“He doesn’t sweat the small stuff,” she said.

Ever since they were six years old, she said, their hearts and their values had been the same.

Norm Beck, Archbold Lions Club vice president, said it was Rohrs who got him involved in the club, a group Rohrs had been with for 40 years.

Jerry, he said, “is a big Lion member” who gets involved including planning and implementing the annual Carp Festival.

In his speech, Rohrs said it was his employer, O. Roger Taylor, then publisher of the Farmland News, who got him involved in Lions.

It was through the Lions Club that he met the late Orrin Taylor, former publisher of the Archbold Buckeye and Roger’s father.

Rohrs said it was Orrin who told him how a carp had been caught on Depot Street during the flood of 1913, which became the basis for the Archbold Carp Festival.

While Rohrs is involved in several activities, by his own admission, the furniture program is his passion.

He describes it as an informal operation loosely run by a group of men who match donated furniture and appliances to those who cannot afford to buy even used furniture.

Speaking to the audience, Rohrs said the furniture program started 15 years ago, when Paul zumFelde, of Lutheran Social Services, asked him to take a used clothes dryer to a woman in Napoleon.

He asked his friend Jim Ziegler to ride along and give him a hand.

They delivered the dryer, placing it next to a washing machine.

As they were leaving, the woman who received the dryer said, “You are answers to my prayers.”

“At that point in our lives, neither Jim or I had been the answers to that many women’s prayers.

“We went back and told Paul we’d take more assignments.”

Beck noted that the Rohrses opened their home to young men and families, “helping them get their lives back in order, giving them a second chance at life when most would have given up on them for the bad decisions they had made.

“This is not the first year they’ve done it. They’ve been doing it for nearly 15 years.”

One of those who had lived with the Rohrses is Tyrone Banks.

“I’ve been in some trouble in my life,” Banks told the audience.

“Sometimes, I need someone to talk to. I can talk to Jerry Rohrs, and he will tell me the truth about a lot of things.”

Riding around in Jerry’s truck, going to pick up or deliver furniture, Banks said Rohrs “will discuss things with me, things I didn’t learn when I was younger, certain things I didn’t understand. He explained things to me.”

Banks said Archbold had welcomed him and made him feel a part of the community.

He said he considered Rohrs to be his father, “and I’d like to talk to him about my back child support.”

Rohrs said over the last 10 years it’s been fun to see people like Banks and others “come to see Archbold for the great community it really is.

“And I have to tell you, that’s one of the reasons I really appreciate being one of Archbold’s Citizens of the Year.”

But, he said, he likes being called “the Furniture Guy.

“And Citizen of the Year has a nice ring to it.”

But more often than not, someone will see him, but not be able to remember his name.

“They will think for a while, scratch their heads, and say, ‘Oh yeah, I know you.