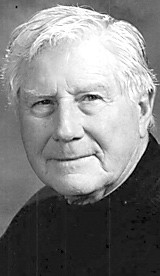 Roger was born in Fulton County on July 8, 1936, to Milton and Alta Rupp Schantz.

He was predeceased by his beloved wife of 38 years, Helen Derby; his parents; and his great-grandson, Max Tharp.

Believing in an obligation to serve his country, Roger proudly served two years in the U.S. Army.

Roger was also a wellknown and respected basketball official throughout Ohio communities, honored in the Northwest Ohio Officials Hall of Fame in 1999.

Roger continued his professional career as an associate professor at the University of Toledo, and was selected by students as Outstanding Teacher in 1970.

His last 17 years in education were at Owens Community College as a professor and as assistant to the president.

Roger retired from education in 1987, but soon became part of a consulting firm specializing in statistical quality management, where he worked internationally for five years.

During his retirement years, Roger resided near Myrtle Beach, S.C., where he enjoyed his golf, his many friends, and the community and comfort he found at Belin United Methodist Church.

Friends are welcome to join the family at a Celebration of Life reception for Roger in Wright Hall at Sylvania United Church of Christ, 7240 Erie Street, Sylvania, Ohio on Saturday, April 27, from 1-3 p.m. Interment will be private at Toledo Memorial Park in Sylvania.

Contributions in memory of Roger may be made to Sylvania United Church of Christ, Sylvania, or to Belin Memorial United Methodist Church, Murrells Inlet, S.C.