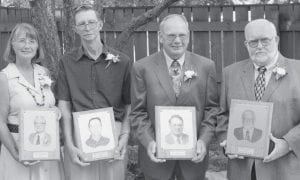 Crossgrove has been an active member of the Fulton County dairy community for over 39 years.

He also represented a fivestate area when he served a three-year term on the National Dairy Board.

Crossgrove serves as the executive director of the Ohio Farmers Union.

He also has provided leadership to the Zion Mennonite Church and the Mennonite Central Committee. He has opened his farm for the community to use for fund-raising and farm awareness activities.

He and his wife, Mabelann, reside in rural Archbold.

As a supervisor of the Fulton County SWCD for 24 years, he served as president, vice president, secretary, and treasurer. He also was on the Board of the Ohio Federation of Conserva- tion Districts, serving as president from 1997-99.

Nationally, he served as director of the North Central Region for the National Association of Conservation Districts. He was inducted into the Ohio Federation of SWCD Supervisors Hall of Fame in 2005.

Carroll has been active in the Wauseon Homecoming Committee, Farm Bureau, Wauseon Chamber of Commerce, First Christian Church, and as a founding member of the Wauseon Jaycees.

His family farm partnership, Carroll Farms, has always been innovative in the production of grain crops and vegetables, and is where he put to use the many conservation practices he promoted.

He and his wife, Paula, live in Wauseon.

Maury Callender, Wauseon, a Michigan State University graduate, worked in agriculture at The Andersons, in the feed and commodities areas. He has farmed since 1970, raising cattle, hogs, and sheep.

Since retiring he has developed a hay, straw and sawdust business. He and his wife, Marlene, raised three children who all earned the American Farm degree in FFA.

Callender has volunteered his time to numerous organizations and committees including the Aetna Grange, where he served as master and executive committee member; the Fulton County Pork Producers, serving as president; Wauseon FFA; and the Fulton County Agricultural Hall of Fame.

He has volunteered at the Fulton County Fairgrounds, helping with the many projects that add something new to the fair for the next year. He assists many Wauseon FFAers in finding jobs, and has donated machinery use and labor to the chapter.

Robinson was inducted posthumously for all the contributions he made during his life in auctioneering and through his involvement in many local organizations.

He was involved in agriculture at many levels and as auctioneer for Delta Livestock, Fulton County Swine Breeders Association, and the Fulton County Junior Livestock Sale.

He helped start several projects in Delta, including “Party on the Park,” and was involved in the development and building of Memorial Hall.

Robinson was Delta’s Citizen of the Year in 1993.