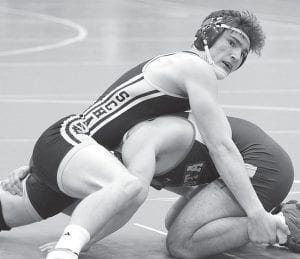 Archbold will be represented at the 82nd Ohio State Wrestling Championships in Columbus, Thursday-Sunday, March 7-9.

The top four wrestlers at each weight class qualified for state.

“We’re coming out with three fourth-place finishers, so the expectations of that first round are not very high,” said Brian Becher, AHS head coach.

“The one nice thing about coming out as a four is there’s not a lot of pressure for you to come out and win that first match.

“That’ll help to get rid of those first match jitters.”

Seniors To End Careers At State

Rocha and Schaffner will get the finish that any senior could ask for: finishing their seasons and careers under the bright lights of the state tournament. 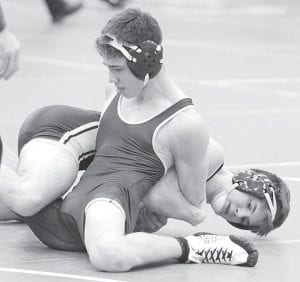 Rocha, a state alternate last season, had to take the long road to a state berth.

The senior started with a strategic default in his first match against Seneca East’s Dakota Laughlin.

The default placed Rocha in a more favorable matchup in the consolation bracket.

In the consolations, Rocha pinned Van Buren’s Dino Donaldson in 2:34.

Rocha then won a 2-1 decision over Gibsonburg’s David Garcia and 6-2 over Bucyrus’ Austin Fulton to advance to the consola- tion semifinals.

In the match for third place, Rocha dropped a 4-2 decision to Matthew Dewitz of Oak Harbor. 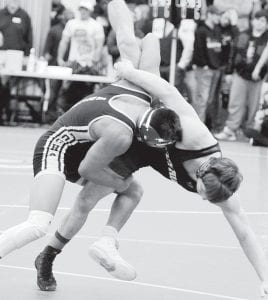 In the semis, Schaffner lost a 7-3 decision to Lakota’s Trevor Franks to drop down to the con- solation semifinals.

Logan Lloyd of Milan Edison was no match for Schaffner, fal- ling to the senior in 1:58.

In the match for third, Schaffner lost a 2-0 decision to Patrick Henry’s T.J. Rhamy to finish fourth.

“If you had to pick guys to go (to state), you would always pick your seniors,” said Becher.

“It’s nice that both of those guys qualified.”

After failing to place in his first district tournament last sea- son, Short turned the page and made the most of his chances to place fourth and qualify for his first state tournament.

Short took down Lakota’s Lane Paul with a pin in 1:47, and then earned a 6-0 decision over Jacob Martz of Collins Western Reserve to reach the champion- ship semifinals. 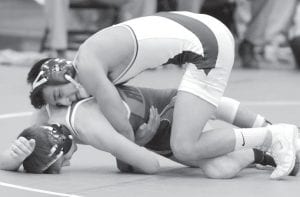 Zach Rocha tries to gain the upper hand on Oak Harbor’s Matthew Dewitz in their match for third place.

Short’s state berth with a 2-1 decision, dropping the junior down to the consolation semis.

In the match for third, Short lost to Milan Edison’s Jordan Keegan 5-2.

“You wonder sometimes what you could get out of him if he worked hard for a couple months instead of one month at the end of the year,” said Becher.

“Hopefully this motivates him to do well in the off season.” 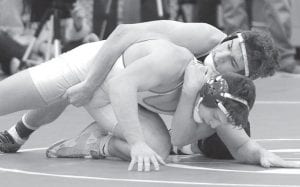 Kasyn Schaffner keeps Patrick Henry’s T.J. Rhamy down on the mat during their match for third place. 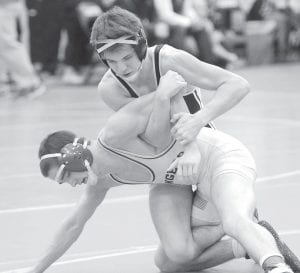 Brennan Short has Northwood’s Colton Falk in a wing, looking to score near fall points on a tilt in the championship semifinals.