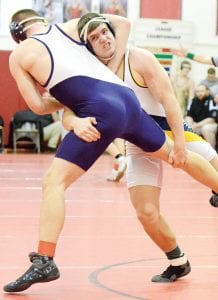 Mason Babcock, left, attempts to drive Bryan’s Dylan McCandless to the mat on a takedown in the finals of the 182-pound weight class at the NWOAL wrestling championships, Saturday, Feb. 16. Zach Rocha, right, secures a takedown of Wauseon’s Connor Twigg in the finals of the 132-lb. weight class en route to a 12-4 major decision.–photos by Mario Gomez

The Streaks placed fourth in the nine-team tournament with 125 points.

“I don’t think we had that bad of a day,” said Brian Becher, AHS head coach.

“Obviously when you’re wrestling that many matches, there’s little things we can improve on. I actually thought we made some coaching mistakes in terms of positions that we put kids in.

“Hopefully we learn from that.” 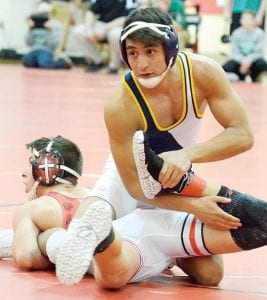 Rocha, a senior, made the most of his final NWOAL tournament appearance, bringing home a championship on his last try.

Rocha was seeded first in the eight-man bracket.

He disposed of Bryan’s Aiden Fenter with a fall in 35 seconds in the quarterfinals.

In the semifinals, Rocha won a 9-5 decision over Delta’s Evan Perry to reach the championship finals.

Rocha got off to a good start early, taking a 7-1 first-period lead.

Twigg scored one more point in the final period, but Rocha claimed the championship with a 12-4 major decision.

“He was really nervous in the semifinal match,” said Becher.

“He needs to get his mind on other things, because it gasses him out and uses a lot of wasteful energy thinking about things that don’t come into play.”

Wrestling as the first seed in his weight class, Babcock, a junior, pinned his way to the finals.

Delta’s Rollin Robinson was the first casualty, falling in 3:48 to reach the semifinals.

In the semis, Babcock made short work of Wauseon’s Jaxon Radabaugh, pinning him in 50 seconds.

In the finals, Babcock squared off against Bryan’s Dylan McCandless.

Babcock scored first on a takedown and gave up an escape for a 2-1 first-period lead.

The gap grew to 5-1 when Babcock scored an escape and takedown in the second.

In the third, McCandless scored an escape, but Babcock scored his final takedown of the match for a 7-2 lead.

McCandless scored another escape, but Babcock won a 7-3 decision.

“He’s wrestling really well right now; finally getting his attacks when he needs to score some points.”

Brennan Short had to wrestle just once to reach the finals.

After receiving a firstround bye, he then defeated Swanton’s Ethan Branum with a fall in 3:05.

Short faced three-time league champion Cole Mattin in the finals, falling to the senior wrestler from Delta by fall in 3:22.

Schaffner was returning from an injury and was seeded second.

Schaffner pinned Montpelier’s Bryer Bentley in 1:29 to reach the semifinals, where he won a 5-3 decision over Evergreen’s Brian Floyd to reach the finals against TJ Rhamy of Patrick Henry.

The post-season for Archbold begins at the Division III sectional tournament, Friday-Saturday, Feb. 22-23 at Archbold.

The top four wrestlers in each weight class qualify for the district tournament at Lakota, March 1-2, in hopes of qualifying for the state tournament in Columbus, March 7-9.

“It’s about wrestling as hard as you can,” said Becher.

“It’s going out there and scoring points and not worrying about the outcome.

“If you’re scoring points than the outcome takes care of itself.”

Wrestling begins at 5 pm on Friday and continues Saturday at 10 am.