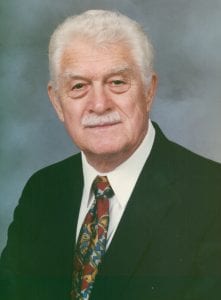 Robert L. Hartman, 79, of Wauseon, passed away late Saturday, Dec. 13, 2008, at the St. Vincent Medical Center in Toledo.
Prior to his retirement he was a foreman for the former El Paso Natural Gas Pipeline.
Mr. Hartman was born near Archbold on Oct. 31, 1929, the son of the late Herman and the late Clara (Hoplinger) Hartman. On March 12, 1949 he married Mary Ann Toth and she preceded him in death in 1997.
He was a US Navy veteran. Mr. Hartman was a lifetime member of the Wauseon VFW and the Wauseon American Legion.
Surviving are two sons, Robert (Judy) Hartman of Wauseon and Stephen (Joyce) Hartman of Stryker; grandchildren, Josh Hartman of Norwalk, Conn., Jason (Becky) Hartman of Hamilton, Ind., Ryan Seibert of Wauseon, Greg (Lindsay) Hartman of Holgate, Rachel Burton of St. Joseph, Mo.,, Sara Hartman of Dearborn, Mich., Matt Hartman of Wauseon, and Megan Burton of Wauseon.
Also surviving are great-grandchildren Hayden, Haylee and Holden Hartman, and brother William (Elaine) Hartman of Wauseon.
A Mass of the Resurrection will be celebrated at 11 a.m., Wednesday, Dec. 17, 2008 at the St. Caspar Catholic Church in Wauseon with the Rev. Fr. Robert Holden officiating. Interment will follow in the St. Caspar Cemetery.
Friends may call at the Edgar-Grisier Funeral Home in Wauseon from 2-8 p.m. on Tuesday where the Rosary will be recited at 7:30 p.m.
The family requests that memorial contributions be made to the St. Caspar Catholic Church.
Online condolences may be made to the family at www.GrisierFH.com.–Posted 12.15, 9:59 a.m.