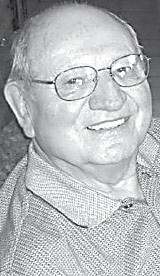 Robert Harlan Wyse passed away at the age of 86 in Santa Clarita, Calif., on Saturday, June 17, 2017, from complications with Parkinson’s disease.

Robert was born on June 3, 1931, in West Unity, Ohio (the Buckeye State), to Aaron and Blanche Ruihley. After their passing in a car accident when he was six years old, Robert was adopted by his uncle Edward and aunt Georgia (Stuckey) Wyse.

Robert is survived by his brother, Dean Wyse, and brother in-law, Lance Johnston.

Robert was a Navy veteran and spent the majority of his career as the administrator for Visalia, Community Hospital, Sierra Medical Group, and Kaweah Medical Group in Visalia, Calif.

He was an active member, deacon, trustee, and treasurer of Faith Baptist Church in Visalia, Calif., and was committed to his faith in God. He loved music, sang in the church choir, and played the trumpet.

He was an avid Dodgers fan and sports enthusiast. He and his wife, Shirley, enjoyed traveling to their home state of Ohio to visit family and friends, trips to Hawaii, and various cruises; with one of their favorite California excursions being trips to Pismo Beach on the central coast.

Robert was a devoted husband and father who loved his wife, daughters, sons-in-law, grandchildren, extended family, and friends.

He was a man who contributed to life and work through his ability to manage projects, raise money, operate organizations, and achieve the vision of those who wanted to build, grow and develop a better future for others.

In this way, he left his quiet, yet indelible, stamp on his community.

He was a man of integrity, and someone who you could always trust in, and count on, to achieve more than one thought possible.

His family will forever love him and greatly miss him.

A Celebration of Life Memorial Service will be held at Faith Baptist Church in Visalia, Calif., on Saturday, Aug. 19, 2017, at 2 pm. He will be honored with a military burial service at Miramar in San Diego (date and time to be determined).

In lieu of flowers, please make donations to Kaweah Delta Hospital Foundation in memory of Robert Wyse. A Wyse Family Scholarship for continuing education will be set up through Faith Baptist Church.