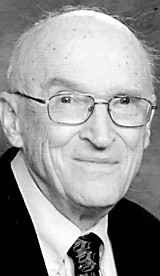 Along with his parents and wife, he was preceded in death by two sisters, Betty Yoder and Judy Amstutz.

He then worked part-time for Sauder Woodworking in the medical department until 1996.

He was an active member of Zion Mennonite Church, Archbold Lions Club, and medical associations.

He was a member of the Archbold Park Board and Archbold Library Board for many years.

During World War II, Dr. Ebersole served in Civilian Public Service, including at a mental hospital in New Jersey, where he became interested in studying medicine.

He loved photography, travel, gardening and camping. He passed this love on to his children and grandchildren. He was kind, positive and encouraging to all.

Visitation will be Saturday, Feb. 1, from 10 a.m. until 12 p.m., at Assembly Mennonite Church, 727 New York Street, Goshen, Ind., where a noon memorial service will take place.

Memorial donations in Dr. Ebersole’s memory may be given to Mennonite Central Committee.