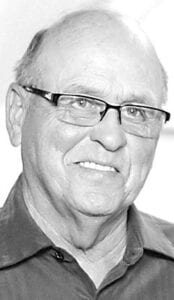 Buggs was preceded in death by his son, Todd, and brother Ronald.

Throughout the years, Buggs worked as a salesman at Delta Livestock, Pettisville Grain, and Kalmbach Feed.

Most will remember his quick and witty sense of humor. Although he was relatively quiet, he always had a joke ready to make everybody smile.

When Buggs wasn’t working or on a golf course, you would be sure to find him at one of his grandkids’ sporting events, as he never missed a game.

As talented as he was as a salesman and golfer, Buggs was best at being a husband, father, and grandfather.

Per his requests and COVID 19 restrictions, there will be no memorial service.