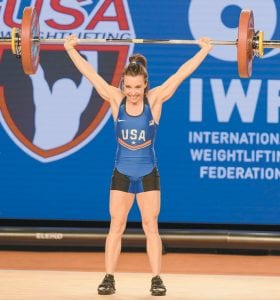 She had a perfect six-for-six performance, completing all six opportunities to lift an amount of weight. She won all three lifts: the Snatch, Clean & Jerk, and the Total.

She also became the lightest American to lift the highest percentage of her bodyweight.

“Those are very impressive numbers, and based on a preliminary look through historical data, it appears that it is a new record,” Farley said.

According to USA Weightlifting, Ritchey’s 83-kg. snatch was 1 kilogram more than the lift she missed on her last attempt at the American Open Finals in December.

She said she’d been struggling with snatches in training leading up to the Pan Ams.

“I was really in my head,” she told USA Weightlifting. “I changed my mindset and decided to have a blast and be who I am in training.

“I’m going to let these girls see who I am. I’m a good athlete. I came here to dominate, and that’s what I did.”

She posted on her Facebook page, “Every single night for about a month leading up to competition, I would lay my head down on my pillow about 9 pm.

“I wouldn’t fall asleep right away. I would visualize exactly how I wanted my snatches and clean and jerks to look at Pan Ams.

“I would visualize absolute domination just catching the lifts, smiling and standing them up like a little boss.

“After several times visualizing the lifts, I would drift off in a deep sleep. I knew what I wanted to do but I had to believe it first.

“Visualization is every- thing for me. It’s how I get better, it’s how I learn, and it’s how I gain my confidence.”

“This one was for my Grandma J. She was my best friend who believed in me no matter what I did. She gave me direction and a listening ear… she was my angel and still is.”

Both the Team USA mens and womens teams were named champions during the closing ceremony.

The 2019 Pan American Championships are a gold-level qualifying event for the 2020 Olympic Games in Tokyo.